Designing a digital power supply: How to write firmware

In part 1 of this blog series, I talked about how to design a digital power supply using Texas Instruments' UCD3138 as an example and focusing on the hardware design. In this installment, I’ll explain how to write firmware to make it work.

Unlike analog power-converter design, which controls everything by hardware, the firmware is the “soul” of digital control; almost all major functions are implemented through code. Because the code is subject to real-time constraints with limited central processing unit (CPU) bandwidth, it is very important to have a well-organized firmware structure. 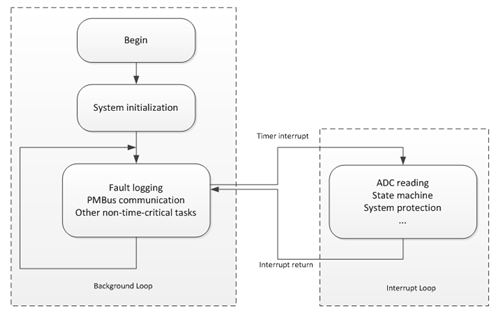 The block diagram of the background loop is simple: After system initialization, the CPU goes into an infinite loop. All non-time-critical tasks are performed in this loop. In the meantime, a timer generates interrupts with a fixed frequency. If at any time there is an interrupt, the CPU will stop what it is doing, store all related data and jump to the interrupt routine. Once the interrupt routine is complete, the CPU goes back to the background loop and continues from where it stopped. 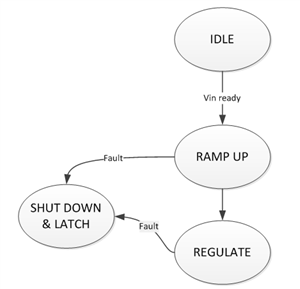 TI’s Fusion Digital Power Designer graphical user interface (GUI) facilitates UCD3138-controlled power-converter designs. By talking to the GUI through the PMBus, you can monitor the power-supply operating status, configure operation parameters and tune the control loop on the fly.

The GUI supports the most popular topologies, including PFC, LLC and phase-shifted full bridge. Different topologies will have different GUI interfaces. A setup ID in the firmware tells the GUI what the topology is so that it will open an interface to accommodate that topology. Figure 3 shows a GUI for a PFC converter: 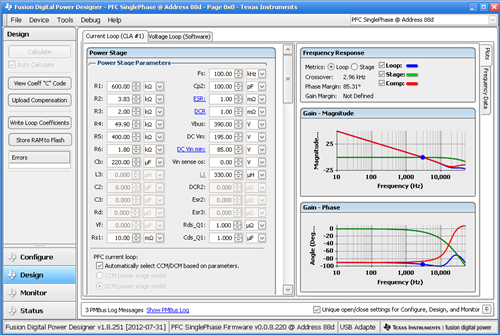 A digital controller can monitor the converter and communicate with the host; in turn, the host can send commands to the converter to perform tasks such as output-voltage adjustment, power-on sequencing, remote on/off control, etc. In an isolated AC/DC application, a PFC is followed by an isolated DC/DC converter, UART is used for communication between PFC and DC/DC, and PMBus is used for communication between DC/DC and load/host, as shown in Figure 4. 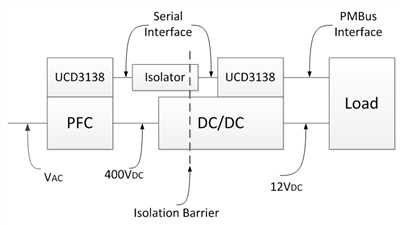 For UART communication between PFC and DC/DC, there is no industry standard protocol at this time; however, the UCD3138 team has developed a complete primary/secondary communication protocol example ready for use.

Hopefully by now you get a rough idea of how to design a digital controlled power supply. Although the design example I gave in this series is based on a boost converter, the same design principle applies to other topologies. The power stage is the same compared to analog solutions, but the control implementation is different: one is implemented through the code and can be dynamic changed, while the other is implemented hardware and is fixed. Firmware development takes lots of work in digital converter designs. Writing code may be a challenge for analog engineers, but once you get used to it, you will enjoy the advantages of digital power.