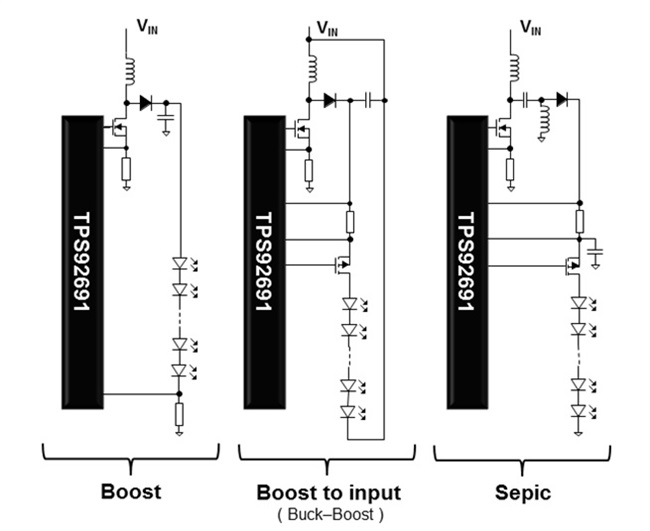 You may wonder what kinds of applications require these topologies: a popular one is LED headlights. A typical automotive LED headlight control unit block diagram is being shown in Fig. 2. More and more vehicles on the road have LEDs rather than traditional incandescent or high-intensity discharge lamps. LEDs last longer and the DC/DC LED driving circuit provides better system efficiency.

There are other reasons to use these topologies. One reason is that an LED’s flexible voltage (or the number of LEDs) enables headlight functions which include high beam, low beam, daytime running light (DRL) and fog. Another reason is that the car battery is usually not sitting at a fixed voltage level. In extreme conditions such as cold crank, warm crank and load dump, the car battery provides a voltage range from below 6V to over 40V. With such a large range of input voltage to drive the LEDs, a natural choice would be either a boost-to-input converter or a SEPIC. Of course, if the LED voltage is always higher than 40V (over the whole input voltage range provided by the car battery), a boost converter would be the best choice.

A common approach to build these types of converters is to use a low-side N-channel FET controller, such as the LM3421, LM3423, LM3424 or LM3429. TI’s newly released TPS92691 is configurable as a boost converter, a boost-to-input converter or a SEPIC. With an independent analog current-adjustment input pin and a pulse width modulated (PWM)-dimming input pin, the converter is capable of providing a 1,000-to-1 contrast ratio in combining both pins’ input. The TPS92691 has a rail-to-rail current-sense amplifier that provides flexibility for either a high-side current-sense resistor or a low-side one. It can also regulate an average LED current with +/-3% accuracy at room temperature for an output LED voltage level as low as 2V or as high as 60V.

Thanks to the DC/DC power conversion topologies described above, we are now able to drive a car with cool LED headlights that provide precise brightness control, environmental friendly and converts power in a highly efficient manner.