Driving LEDs with both analog and PWM dimming 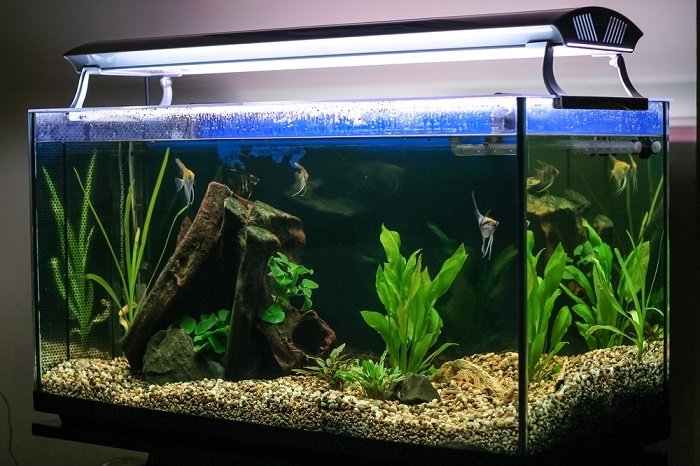 Recently, I visited a customer who is making LED lights for aquariums. For me, the most interesting part was when we discussed the type of LED driver he wanted. For aquarium lighting, a brightness-dimming feature will emulate different brightness settings found in nature, such as sunset and sunrise. Pulse-width modulation (PWM) dimming is usually used for changing LED brightness, but my customer does not care about a PWM dimming feature at all. He told me that the human eye is a very good low-pass filter, as everything higher than 30Hz is basically unobservable; however, this is not true for sea creatures. Sea creatures are sensitive to frequencies higher than 30Hz and feel uncomfortable with PWM dimming. He would rather seek out analog-current-adjustable (that is, analog-dimming) LED drivers.

TI’s TPS92512 accepts an analog voltage in order to change the average current output of the LED. It accepts an analog voltage range from 0.18V to 1.8V on the current-adjustment (IADJ) pin. The current-sense (ISENSE) pin voltage is the IADJ pin voltage divided by 6; thus, the voltage on the ISENSE pin varies from 30mV to 300 mV. By selecting a suitable current-sense resistor for setting the required full-current level, the TPS92512 can get an accurate 10:1 analog-dimming ratio by varying the input voltage applied to the IADJ pin. Any voltage higher than 1.8V applied to the IADJ pin activates an internal clamp circuit so that the ISENSE pin voltage remains at 300mV.

My aquarium LED lighting customer would benefit from selecting the TPS92512 to change the brightness level by adjusting the average LED current output. Other general LED lighting customers will still need the PWM dimming feature. The TPS92512 also has a PDIM pin that accepts digital PWM signals in order to change LED brightness according to the duty cycle of the signal. By carefully choosing the PWM dimming frequency and the operating frequency of the TPS92512 buck regulator, you can achieve more than a 100:1 dimming ratio through the PWM dimming method.

You can also use the PDIM pin and IADJ pin on the TPS92512 together to extend the total brightness control to more than 1,000:1 by simply controlling both the IADJ pin (by applying an analog voltage between 0.18V and 1.8V) and the PDIM pin (by applying a suitable duty-cycle digital signal) simultaneously without compromise. The TPS92512 offers a very flexible way to control LED brightness.