Many modern, smart Internet-of-things (IoT) devices that run from line power need backup power to safely power down or to perform last-gasp communication in the event of an unexpected power outage. For example, an electricity meter could share details about the time, location and duration of a power outage through a radio-frequency (RF) interface. Recently, narrowband IoT (NB-IoT) has become popular for such actions given these advantages:

Table 1 shows the current consumption during different NB-IoT operating modes over time. Peaking at 310 mA in data transmit mode for 1.32 s, the load varies significantly with operation mode changes. The average current consumption in the entire process is 30 mA for 80 s – a load duration that requires enough backup power and seamless power switching when the main power grid is suddenly down. The TPS61094 60-nA quiescent current (IQ) bidirectional buck/boost converter enables reliable and simple backup power designs, while serving as a one-chip solution that achieves supercapacitor charge and discharge without extra circuitry.

* Customer and end equipment specific. Can be several minutes to days.

To implement an effective backup power circuit with a single supercapacitor and the TPS61094, Figure 1 shows how we configured the TPS61094 evaluation module (EVM) to support enough backup power for the NB-IoT load profile in Table 1.

Figure 2 shows oscilloscope measurements for a complete backup power cycle. VIN represents the system voltage from the grid. VOUT is the output voltage from the TPS61094 and VSUP is the supercapacitor voltage. IOUT shows the load current consumption. In our example, the load is 100 mA, which is 3.33 times the average current consumption of the load profile. We increased the load in order to determine how the TPS61094 switches input power when the grid is down in a more extreme load condition. 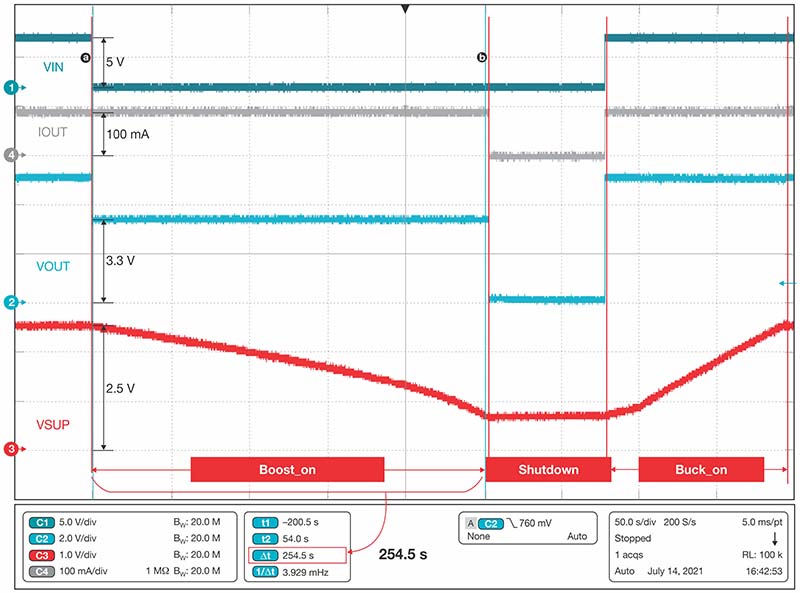 There are also other solutions available to you, each with advantages and drawbacks. The Supercapacitor Backup Power Supply for E-Meters Reference Design, uses discrete circuitry to charge the supercapacitor and the TPS61022 boost converter to boost the supercapacitor voltage to a higher system voltage when the grid is down. The TPS61022 output current capability is higher than it is for the TPS61094 solution, but will require more external components.

Table 2 lists the most important characteristics of each backup power approach.

Low-power, wireless standards are becoming increasingly popular. For high-integration, simple design and the best light-load efficiency, the TPS61094 is a good choice for backup power applications with LTE-M, Lora, Bluetooth and other emerging wireless interfaces.

If you need more output current, the e-meter or current limit reference designs are very effective solutions. Although they require more discrete components, they can support higher-power RF transmissions such as GPRS.