eFuses: clamping and cutoff and auto retry, oh my! – part 2/3

If you missed part 1 of this blog series, be sure to check out the different options available with eFuses for handling overvoltage events (output-voltage clamping vs. output-voltage cutoff). In this installment, I’ll focus on eFuse options for overcurrent protection (current limiting vs. circuit breaking). Continuing our journey down the Yellow Brick Road, let’s once again start by delving into the more common option: current limiting.

The benefits of current limiting

When an overcurrent event occurs, an eFuse such as the TPS25940 will limit the output current to a threshold set by an external resistor. In Figure 1, when the eFuse sees 4A (assuming a current limit [ILIM] of 3A), it will proceed to limit the output current to 3A. The scope shot in Figure 2 shows this response, with ILIM = 3.6A. The eFuse will current limit until either the overcurrent event is removed (IIN < ILIM) or until the eFuse reaches thermal shutdown (typically TJ = 150°C). Once an eFuse enters thermal shutdown, it will enter one of two modes: either latch off or auto retry (both of which I’ll discuss in the third installment of this series). 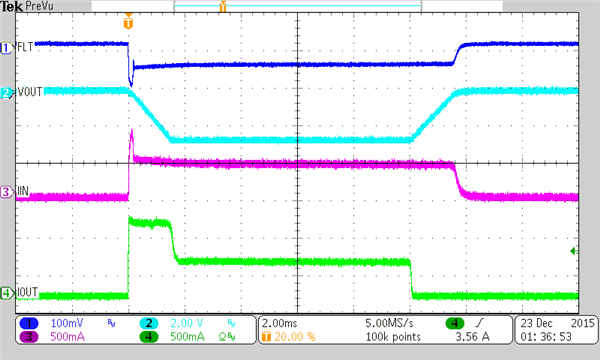 Current limiting shares similar benefits to that of output-voltage clamping, in that the eFuse allows the system to not see the overcurrent event, protecting all downstream circuitry from the higher current. It will also report the fault, allowing the system to prepare for imminent shutdown and perform “last-gasp” functionality. This can be beneficial in applications such as Solid State Drives (SSDs), especially if the overcurrent event is temporary. However, applications where safety is more important than uptime can benefit from an eFuse with circuit breaking instead of current limiting.

The benefits of circuit breaking

An eFuse with circuit breaking acts as its name suggests; it breaks the circuit in response to an overcurrent event. Looking again at Figure 1, if IIN suddenly became 4A, an eFuse with circuit-breaker functionality (such as the TPS25944A or TPS25944L) would open the circuit. This means that IOUT would be 0A, and all of the downstream circuitry would be protected from the higher current, as shown in Figure 2. 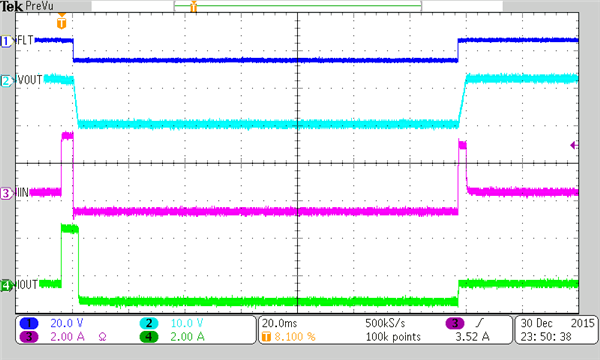 The benefit of this functionality is similar to the benefit of an eFuse with output-voltage cutoff; it does not allow the higher current to affect any downstream circuitry. This form of protection comes at the cost of the downstream circuitry losing power, but that can actually be a good thing in an application like the inside of a data center server rack.

There is no one-size-fits-all answer as to which type of overcurrent protection will be best for every application. However, now that you are familiar with what options are available, you should be able to make the best decision for your next design. Stay tuned for the third and final installment of this series, when I’ll discuss what happens after an eFuse enters thermal shutdown.