How to choose the right linear charger for your application

Typical questions or concerns from designers include, “How can I maximize battery run time?” “How do I extend my products’ shelf life?” “Is it possible to over discharge the battery?” “What happens if the battery is missing or defective?” “How do I get my product to work with a weak adapter?” and “Can I use the same charger for different designs and different batteries?” In this blog post, I will discuss how different linear charger features can help resolve these issues.

A power-path function adds one more switch inside the charger, enabling a separate output to power the system and charge the battery. This architecture leads to quite a few other features, but let’s start by looking at Figure 1, which shows a simple linear charger without a power path. The system input and battery terminal connect to the same charger-output node. This non-power-path architecture is popular because of its simplicity and small solution size; examples include the bq24040 and bq25100 battery chargers. Figure 2 shows the bq25100’s evaluation module (EVM). 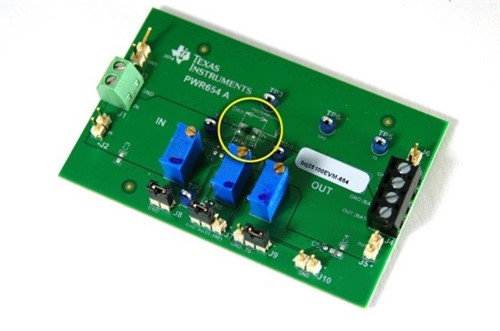 This architecture has a few limitations, however. The charger output, battery terminal and system input all connect at the same point. In the case of a deeply discharged or even defective battery, it may not be possible to power up the system even when connecting an external power source. The battery needs to charge to a certain voltage level before the system can power up. Thus, if a product has a deeply discharged battery, the end user may think that the entire system is dead when they plug in the adapter and find nothing happening because the system cannot power up. If the product actually has a defective battery, the system may never power up. For products with removable batteries, it may be possible to remove and replace a defective battery with a different pack. But if the battery is embedded within the equipment, a defective battery will render the entire product useless.

Another issue with this architecture is that the charger only detects the total current going into both the battery and the system. If the system is operating, how can a charger determine if the battery current has reached a termination level?

The solution to all of these concerns is fairly straightforward – you simply add in another switch between the system input and the battery terminal. Figure 3 shows the power-path linear charger architecture. In addition to the Q1 field-effect transistor (FET), which routes current in from the external source, adding one more switch (Q2) decouples the battery from the system when necessary. The system always has the priority of input power, and can turn on instantly when the end user plugs in the adapter. If the adapter has additional power left from supporting the system load, the battery can charge.

This approach also allows the charger to independently monitor the charge current into the battery (as opposed to the total current drawn from the adapter) to allow proper termination and check for any fault conditions.

The bq24072 device family comprises stand-alone power-path linear chargers. The bq25120A is a newer device with more integration. Aside from the power path linear charger, it also integrates a DC-DC buck converter, an LDO, pushbutton controller, and I2C interface for customer programmability.

Ship mode is typically the lowest quiescent current state of a device. Manufacturers enable this state right before a product leaves the factory in order to maximize shelf life, so hopefully the battery is not dead when the end user gets the product. The ship-mode circuit essentially disconnects the battery to prevent battery leakage into the system by turning off Q2 in a power-path charger. When the end user turns the product on for the first time, Q2 turns back on and the battery connects to the system.

Another feature usually confused with DPPM is VIN-DPM. The mechanism may sound very similar, but the focus is quite different. Input power sources or adapters have power ratings. There are situations where the input power source does not have enough power to supply what the device demands. Designers are seeing this more commonly now with different USB standards. The device that’s charging may need to work with various (and even unknown) adapter types. If the input source is overloaded and causes the input voltage to fall below the undervoltage lockout (UVLO) threshold, the device will shut down and stop charging. The power-supply load goes away and the adapter recovers. Its voltage goes back up to above UVLO and charging restarts, but the adapter is immediately overloaded again and crashes. This undesirable situation is called “hiccup mode.” See Figure 4. 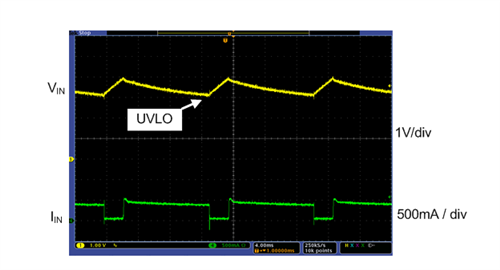 Now you can see that VIN-DPM and DPPM are in fact two very different features. VIN-DPM monitors the adapter’s output (or the charger’s input) and keeps it at a certain level. DPPM monitors the charger output (or the system rail) and maintains it at a minimum predetermined level. These two features can work very well together to allow smooth operation across different operating conditions. Not all chargers have both features. You can implement VIN-DPM on non-power-path chargers as well.

I used the linear charger topology as an example to illustrate some essential features related to power-path functionality, but switching chargers can certainly have this functionality as well. For more information on battery charger selection, see the Battery Charger Solutions page.