The LM317-N was the first adjustable voltage regulator, introduced way back in 1975. It’s still widely used in the industry as a constant voltage supply. But did you know that this device can do much more than regulate voltage? Its versatile architecture allows you to use it not just as a voltage regulator but also as a cool, constant-current LED driver.

Wait. Any linear regulator could be used for LED lighting with the addition of a current-limit resistor … what’s new with the LM317-N? Well, it’s actually not what’s new but what’s old that makes the LM317-N click as a simple LED driver.

It’s easy if you understand its architecture. See Figure 1, which shows a functional circuit. An operational amplifier (op amp) connected as a unity-gain buffer drives a power Darlington transistor pair. The op amp and biasing circuitry for the regulator are arranged so that all of the quiescent current is delivered to the regulator output (rather than ground), eliminating the need for a separate ground terminal. Furthermore, all of the circuitry is designed to operate over the regulator’s 2V to 40V input-to-output differential. 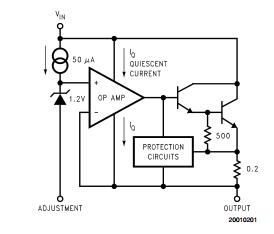 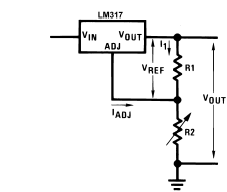 Because the architecture ensures a 1.2V differential between the output and the adjust pin, you can use a sense resistor across the two terminals to set a constant current in the circuit. Figure 3 shows the configuration. 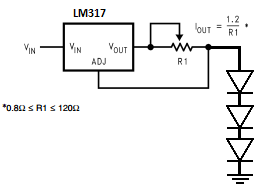 You could connect the output of this to a series of LEDs (with the other terminal connected to ground) to create a very simple LED driver architecture. What are the advantages of this architecture?

The LM317-N has existed for years; almost every semiconductor vendor makes a version. However, we at Texas Instruments took the LM317-N to the next level with the LM317A. The voltage-reference accuracy of the LM317A is 1%. This ensures very tight output-current regulation even with temperature, input and load variations.

For all the reasons I’ve mentioned, the LM317A is a sought-after device for small LED lighting applications, especially when you need a simple linear drive in automotive subsystems. If the dropout of the LM317A (2.5V-3V) is a concern, consider the upgraded LM1086, which takes it down to 1-1.3V and provides more headroom for your lights.