From blue light to green power

Whizzing across the Japanese countryside at 300kph, my colleague Tomomasa Emoto and I arrived at Nagoya station by Shinkansen. Nagoya is home to famous Shintō shrines and castles, but that is not why we were there. We had the pleasure of visiting Professor Hiroshi Amano at Nagoya University. Amano-sensei  won the 2014 Nobel Prize in physics, along with Isamu Akasaki and Shuji Nakamura, for the invention of efficient blue light-emitting diodes (LEDs). Their invention has enabled bright and energy-saving white-light sources.

Once at Nagoya University, we made our way to Amano-sensei’s office. At the entrance to the wing, we exchanged our shoes for clean slippers; I’m told this is quite typical in Japan. Amano-sensei warmly greeted us and welcomed us into his office, and we had the pleasure of hearing the perspectives of a Nobel Prize winner on gallium nitride (GaN). 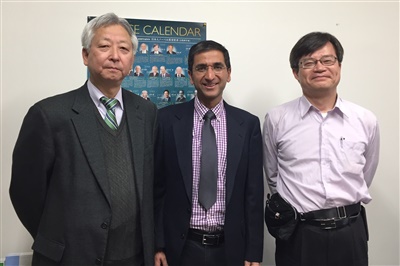 While many of us are working to establish the “present” of GaN, Amano-sensei is working to define the future. Now with GaN LED work in good industrial hands, he has taken on a new challenge: how to unlock the full potential of the material. Today’s commercial GaN, he explained, is not perfect, and it is difficult to grow thick material. As a result, devices can only harness about a third of their high-field capability. By focusing on inexpensive ways to grow high-quality bulk material and by looking at different structures, it  is possible to make devices that operate closer to the material limit. These devices will not only be smaller but also higher voltage. Silicon carbide will have a hard time competing against GaN,  he explained, when low-cost high-quality bulk GaN growth becomes available.

GaN wasn’t always this popular. I was interested to know how Amano-sensei had the insight to work on GaN at a time when the world had given up on it, so I asked. “The world needed a blue LED,” he explained, “and most people were working on zinc selenide. I did not like it, because it was very brittle. I could drop GaN and nothing would happen, so I knew it would be more stable.”

As we left, slipping our shoes back on, I was glad to know that a Nobel Prize winner is thinking about the future of GaN devices. I can now go back to my world of working towards a more energy-efficient future, where I make sure that TI GaN devices, such as the LMG3410, operate reliably under actual-use conditions.