GaN to the rescue! Part 2: Measurements

Measuring reverse recovery in a synchronous buck converter is a challenge. Current probes are fairly large and would add significant inductance to the power-stage loop. The bandwidth of current probes is also inadequate.

How about a shunt resistor? That sounds promising, but you’ll need to make sure that it doesn’t introduce significant loop inductance. I found a few that are 10mΩ and “low inductance.”

I’m tempted to put this in the source of the synchronous FET, but there are two problems:

One solution is to put the shunt resistor in the drain of the upper MOSFET so that there is no chance of it interfering with the gate drives. The Vishay VCS1625/Y08500R01000F9R worked – it is built with Kelvin connections and constructed to reduce inductance. See Figure 1.

To get a baseline Qrr measurement with a silicon MOSFET bridge, I got out a cutting knife, cut an island for the shunt resistor on the TPS40170EVM-597, and placed the shunt resistor. I used a 50Ω SMA-to-BNC cable to run the signal to the scope (terminated with 50Ω). I placed a 50Ω resistor in series so I get one-half the signal, but no ringing. Be sure to use skew adjustments when mixing probe types!

Note that with the shunt in the top, the scope is grounded to the positive input rail. This means that the power-supply positive output is grounded (negative supply to the buck converter) and any other test equipment like load banks must not short out the supplies through the scope connections. Figure 2 shows the modified evaluation module (EVM) schematic. 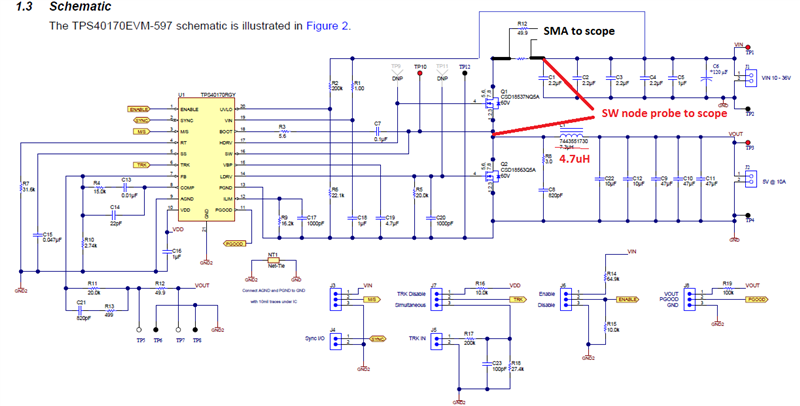 Figure 3 shows the TPS40170 EVM after inserting the shunt. 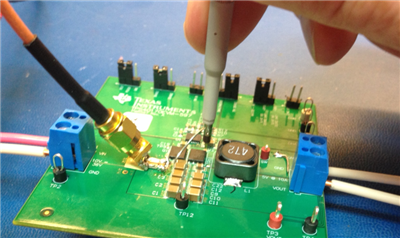 Figure 4 shows the switch-node and shunt waveforms at 300kHz, 24VIN, 5VOUT and 4AOUT. 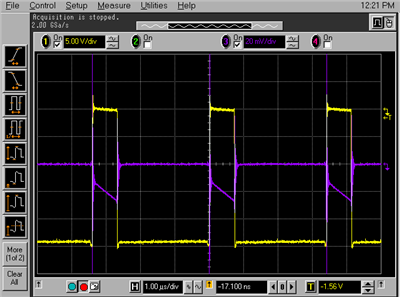 In Figure 4, yellow is the software node and purple is the top FET drain current. The average of the current “triangle” waveform matches well with the 4A load -> 20mV = 4A. 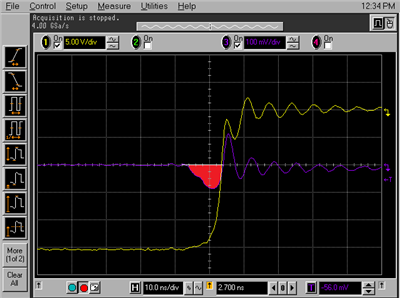 Think about that! An 18A, 12ns-wide current pulse is being drawn from the input supply every 3.33µs. The high –di/dt will cause voltages to develop in any loop inductance in the power stage and possibly cause operational problems. Fortunately, the TPS40170EVM-597 has a very good layout to mitigate problems – it’s not always that way in practice.

Enter GaN – where is the recovery? 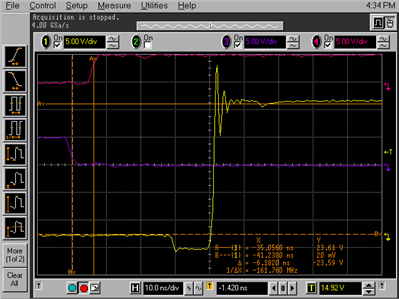 I included the high/low drive signals for reference (Channels 3 & 4). The “body diode” conduction has a higher drop than the MOSFET counterpart – I see ~2.5V during this time instead of ~0.6V. I grabbed this scope shot because I’m going to add a resistor/inductance to the input loop that will cause a bit more ringing.

Figure 7 shows the change when I added the shunt resistor in the drain of the upper GaN device. 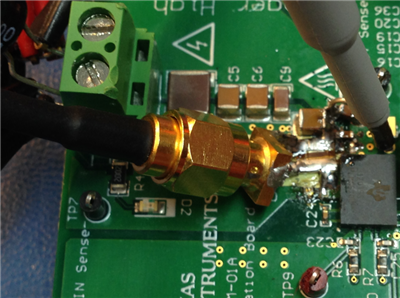 Note that I had to implement a level-shift circuit (simple PNP and resistor) to level shift the 300kHz 21% duty-function generator signal from “ground” (which is now the positive side of the 24V supply) to the PWM input at -24V. Without that, I’d have a ground contention (otherwise known as a blown fuse) when putting the scope sensing on the positive rail. Figure 8 shows the switch node (yellow) and top GaN current (purple). 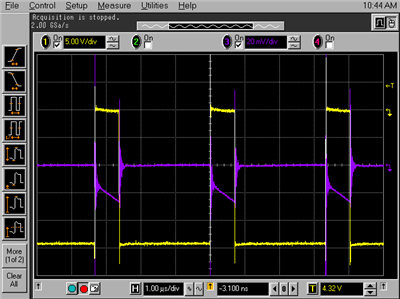 Zooming in on Figure 9, the recovery current has disappeared (no red area). There is a little additional ringing due to the added inductance from the sense resistor, but no recovery losses or associated complications. You’ll still see switching and switch-node capacitance losses, but GaN does not show the reverse recovery that causes issues in silicon MOSFET-based converters – a welcome relief! 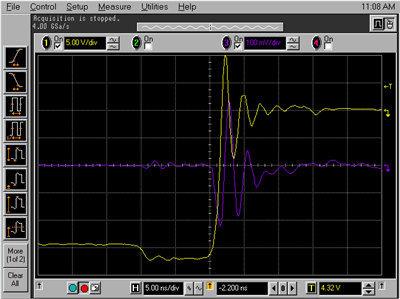