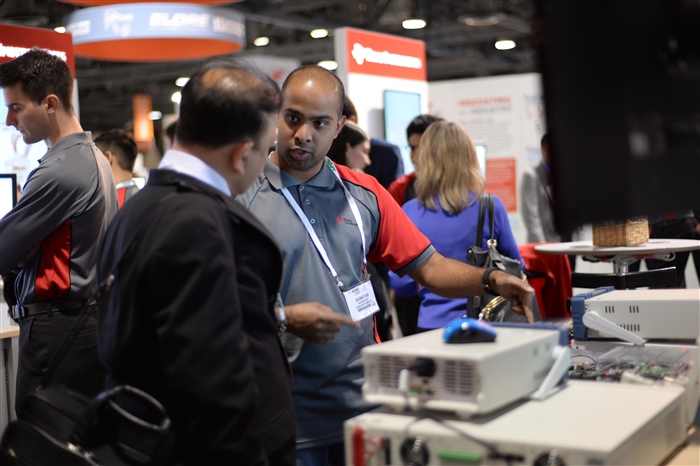 The Applied Power Electronics Conference (APEC) is somewhat like a big family reunion. It not only draws many of the same people from industry, academia and government, but it is one of the largest power-electronics conferences in the world (with a record breaking 5,000+ attendees this year). Although there are new faces, new research findings, new products and new topics of conversation each year, there is a certain predictable cadence to it. Here are some highlights from the conference this year.

Wide-bandgap semiconductors like gallium nitride (GaN) and silicon carbide (SiC) are still a hot topic. These compound semiconductor devices promise improvements in power-converter speed, size and efficiency. During APEC, TI announced that we’ve leveraged our existing manufacturing infrastructure and capabilities to qualify our 600-V GaN process. Several other companies also showcased GaN devices, but this year there was more talk of further integration. Some companies were discussing the monolithic integration of drivers with GaN switches, but no products are available yet.

Emerging applications such as 48V-to-point-of-load (POL), wireless power and USB Type-C had a lot of interest. Google joined the Open Compute Project a few weeks ago and proposed a computer server-rack architecture based on a 48V power-distribution bus to improve overall system efficiency. While the 48V bus has been around for a long time, the push (and challenge) is for high-efficiency 48V-to-POL voltage regulators. EPC showcased TI’s 48V-to-1V EVM  which uses the LMG5200 GaN module (driver and FETs), announced at APEC last year, and a new TI analog controller (TPS53632G).

A number of vendors were also demonstrating wireless charging and USB Type-C solutions. The desire to “cut the cord” has propelled wireless charging for personal electronics. The question now is whether wireless power transfer becomes widely adopted in electric vehicles and other high-power applications. I am very excited for USB Type-C. USB Type-C enables high data-transfer rates and higher power delivery through a small, flippable connector. No more fumbling around in the dark or hunched over behind a computer trying to figure out which way to plug in the USB cable.

Fresh techniques in converter topologies, magnetics design, control schemes and integration are on the horizon. I am sure they will continue to be topics of conversation as the power-electronics family gathers together again at APEC next year. Until next time, learn more about how TI is helping drive innovation in power technology with the resources below.