It’s a challenge to create highly efficient and compact designs while also adhering to strict electromagnetic interference (EMI) requirements imposed by groups such as Comité International Spécial des Perturbations Radioélectriques (CISPR). Therefore, component selection becomes a critical part of the design process. As with most design decisions, choosing between different components almost always comes down to an assessment of tradeoffs based on your most critical design goals. Known for high efficiency and good thermal performance, buck regulators are not typically considered low-EMI options. Fortunately, you have several options for reducing the EMI generated by such regulators. To aid further discussion, Figure 1 shows a simplified buck regulator schematic.

Beyond selecting proper passive component values to ensure a functional design, board layout should be your first consideration when your design must fall under EMI limits. There are two general rules that can help minimize generated EMI with all buck regulator board layouts:

In instances where board layout optimization is not possible, there are other options. Learn more about them in the technical article, “How Device-Level Features and Package Options Can Help Minimize EMI in Automotive Designs.”

As I mentioned, reducing the area of high di/dt current loops is very important when designing switching regulators to remain under EMI limits. In a buck regulator, it’s important to consider the input-voltage-to-ground loop from an EMI perspective. A buck regulator steps down a higher DC voltage to a lower one by switching the connection to the supply on and off, resulting in high-side metal-oxide semiconductor field-effect transistor (MOSFET) (Q1) current, shown in Figure 2. 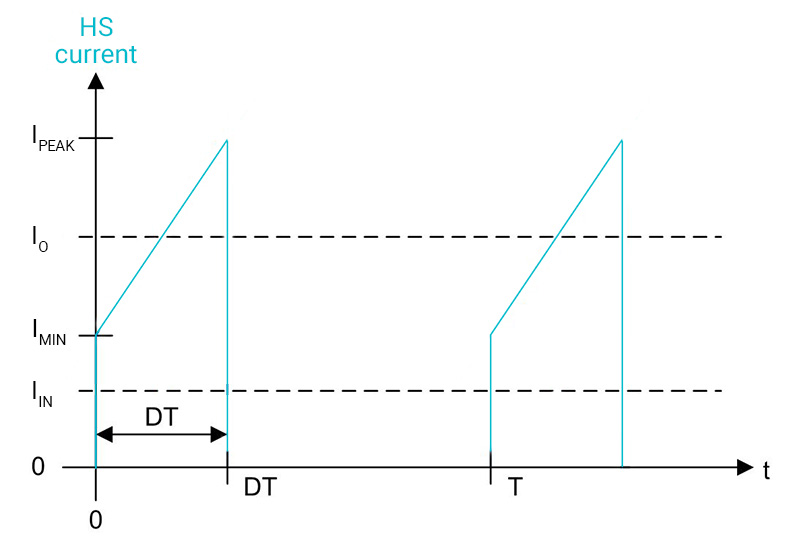 The MOSFET switches on and off rapidly, creating very sharp, almost discontinuous currents supplied by the input capacitor. Some devices, such as TI’s 3-A LMQ66430-Q1 and 6-A LMQ61460-Q1 36-V buck regulators, integrate high-frequency input capacitors inside the package, resulting in the smallest possible input current-loop area. Reducing the area of this input current loop results in smaller parasitic inductance at the input, which reduces the amount of electromagnetic energy emitted.

Another high di/dt current loop that you should consider is the boot capacitor loop. The boot capacitor is responsible for supplying charge to the high-side MOSFET gate driver during the on-time. Internal circuitry refreshes this capacitor during the off-time. The source terminal of the high-side MOSFET connects to the switch node rather than GND. Referencing the boot capacitor to the source pin of the MOSFET ensures that the gate-to-source voltage (VGS) is high enough to turn on the MOSFET. With most buck regulators, you will have to leave some switch node area available on the board to connect the bootstrap capacitor, although this can be counterproductive when trying to minimize the area of the switch node for EMI. By integrating the boot capacitor inside the package, the LMQ66430-Q1 follows the two rules that I mentioned earlier, while also reducing the need for an external component.

It can be difficult to design compact power-supply designs capable of remaining under strict EMI limits. Buck regulators with integrated capacitors can make the process of EMI-compliant designs easier, while also helping reduce the overall external component count.

Check out these technical articles: