How to reduce acoustic noise of MLCCs in power applications

However, MLCCs do not always sit quietly on the board and do their job. Sometimes they get bored and start to “sing.” This is due to the piezoelectric effect of the ceramic material, which has the same characteristics as other ferroelectric dielectrics. When an electric potential or field applied on the surface of an MLCC causes a deformation at a frequency range from 20Hz-20kHz, it could be audible to humans. This is called MLCC acoustic noise, or singing noise.

Major contributions to acoustic noise include:

Figure 1: MLCC and board deformation when applying an electric field

The MLCC itself should be quiet to human ears. However, it can be loud when mounted on a printed circuit board (PCB). Let’s say you had a ceramic capacitor at the input of a switching power converter. The switching behavior creates a high-frequency voltage change on the ceramic capacitor; as the voltage increases and decreases, the MLCC will expand and contract. The deformation of the MLCC creates vibration of PCB, which causes to buzz amplifying. The higher the electric potential change, the larger the deformation (piezoelectric effect), which will result in a louder sound when the frequency occurs in the audible range.

Some applications can use electrolyte or tantalum-type capacitors, preferably thru-hole types when acoustic noise is problematic. But for applications that are more cost-sensitive or size-constrained (such as personal electronic devices), you cannot avoid thin, small ceramic capacitors, and the need to reduce noise immediately becomes critical.

Here are a few available solutions that can minimize or reduce noise to acceptable levels: 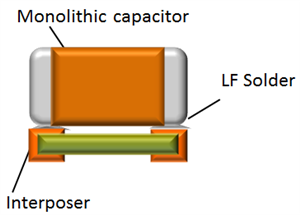 Figure 5: Capacitors on each side of a PCB to create vibration cancellation

Considering line-transient response as an example, an experiment was conducted using the TPS51622, one of TI’s DCAP+™ Vcore controllers, by measuring the noise level with a sound meter when varying the output voltage change with fast (48mV/µs) and slow (12mV/µs) slew rates using the Intel voltage regulator (VR) tool. Sending an I2C command to the TPS51622 changes the output voltage from 0.5V to 1.5V, and the input-voltage ripple was measured shown in Figure 5. 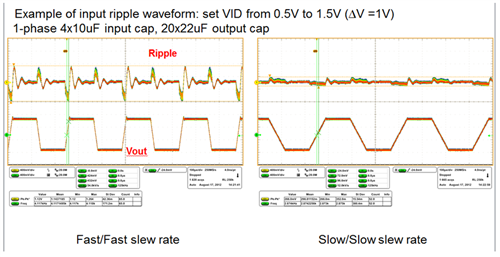 The voltage amplitude with a fast slew rate is much higher than with a slow slew rate; this voltage difference across the capacitor directly translates into an increase of noise in decibels. Measured data shows that the noise dropped to a lower, quieter level, from ~40dB to ~50dB. See table 1 for other sound levels and effects.

Table 1: Noise sources and their effects

The wide usage of conventional ceramic capacitors brings acoustic noise issues to power system designs. However, there are solutions that approach the problem from different angles: changing the electronic characteristics of the MLCC itself, or minimizing its interaction with the PCB. These methods either reduce the noise to an acceptable level or remove the noise from the source by using more expensive “anti-noise” capacitors.