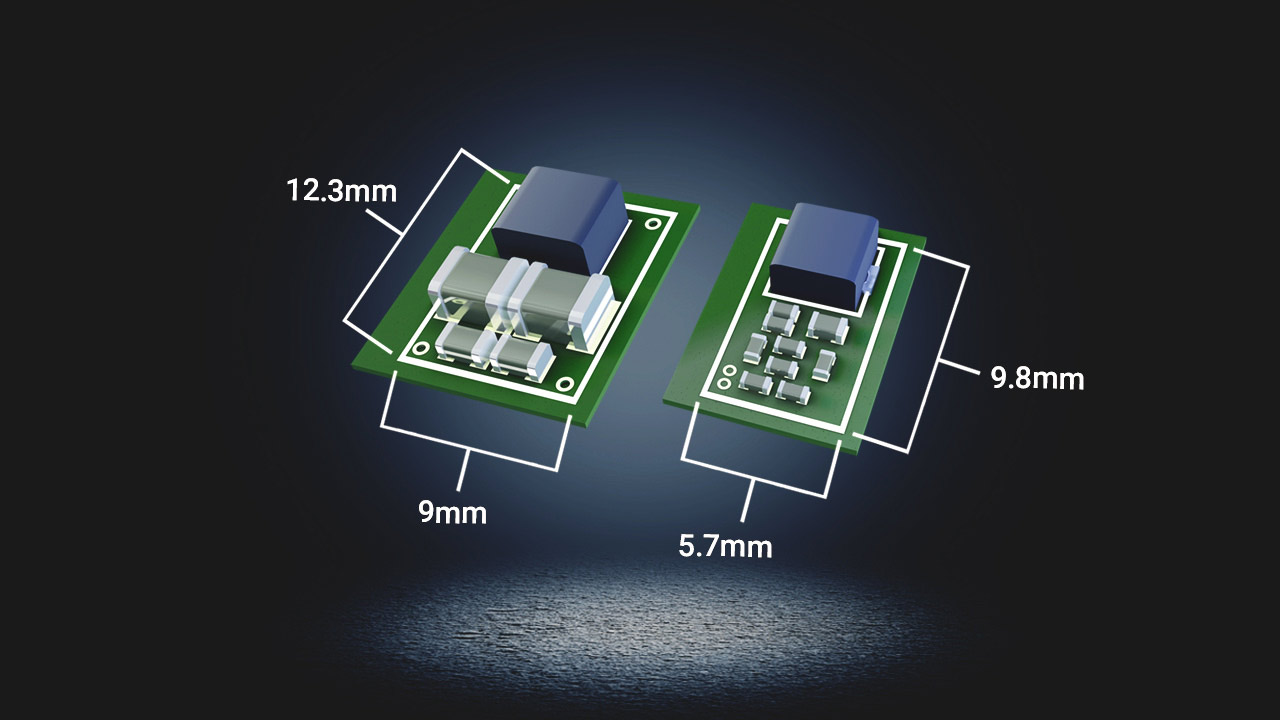 This technical article is co-authored by Tim Hegarty

Design engineers working on low-electromagnetic interference (EMI) applications typically face two major challenges: the need to reduce the EMI of their designs while also shrinking solution size. Front-end passive filtering to mitigate conducted EMI generated by the switching power supply ensures compliance with conducted EMI standards, but this method can be at odds with the need to increase the power density of low-EMI designs, especially given the adverse effects of higher switching speeds on the overall EMI signature. These passive filters tend to be bulky and can occupy as much as 30% of the total volume of the power solution. Therefore, minimizing the volume of the EMI filter while increasing power density remains a priority for system designers.

Active EMI filtering (AEF) technology, a relatively new approach to EMI filtering, attenuates EMI and enables engineers to achieve a significant reduction in passive filter size and cost, along with improved EMI performance. To illustrate the key benefits that AEF can offer in terms of EMI performance and space savings, in this technical article I’ll review results from an automotive synchronous buck controller design with integrated AEF functionality.

Passive filtering reduces the conducted emissions of a power electronic circuit by using inductors and capacitors to create an impedance mismatch in the EMI current path. In contrast, active filtering senses the voltage at the input bus and produces a current of opposite phase that directly cancels with the EMI current generated by a switching stage.

Within this context, take a look at the simplified passive and active filter circuits in Figure 1, where iN and ZN respectively denote the current source and impedance of the Norton-equivalent circuit for differential-mode noise of a DC/DC regulator.

The active EMI filter configured with voltage sense and current cancellation (VSCC) in Figure 1b uses an operational-amplifier (op-amp) circuit as a capacitive multiplier to replace the filter capacitor (CF) in the passive design. The active filter sensing, injection and compensation impedances as shown use relatively low capacitance values with small component footprints to design a gain term denoted as GOP. The effective active capacitance is set by the op-amp circuit gain and an injection capacitor (CINJ).

Figure 1 includes expressions for the effective filter cutoff frequencies. The effective GOP enables an active design with reduced inductor and capacitor values and a cutoff frequency equivalent to that of the passive implementation.

Figure 2 compares passive and active EMI filter designs based on conducted EMI tests to meet the Comité International Spécial des Perturbations Radioélectriques (CISPR) 25 Class 5 standard using peak and average detectors. Each design uses a power stage based on the LM25149-Q1 synchronous buck DC/DC controller, providing an output of 5 V and 6 A from an automotive battery input of 13.5 V. The switching frequency is 440 kHz.

Figure 3 presents the results when enabling and disabling the AEF circuit. The active EMI filter shows much better low- and medium-frequency attenuation compared to the unfiltered or raw noise signature. The fundamental frequency component at 440 kHz has its peak EMI level reduced by almost 50 dB, making it much easier for designers to meet strict EMI requirements.

Figure 3: Comparing filtering performance when AEF is disabled (a) and enabled (b)

Figure 4 offers a printed circuit board (PCB) layout comparison of the passive and active filter stages that provided the results in Figure 2. The inductor footprint reduces from 5 mm by 5 mm to 4 mm by 4 mm. In addition, two 1210 capacitors that derate significantly with applied voltage are replaced by several small, stable-valued 0402 components for AEF sensing, injection and compensation. This filter solution decreases the footprint by nearly 50%, while the volume decreases by over 75%.

Figure 4: PCB layout size comparison of passive (a) and active (b) filter designs

As I mentioned, the lower filter inductance value for AEF reduces the footprint and cost compared to the inductor in a passive filter design. Moreover, a physically smaller inductor typically has a winding geometry with a lower parasitic winding capacitance and higher self-resonant frequency, leading to better filtering performance in the higher conducted frequency range for CISPR 25: 30 MHz to 108 MHz.

Some automotive designs require two input capacitors connected in series for fail-safe robustness when connected directly across the battery-supply rail. As a result, the active circuit can support additional space savings, as small 0402/0603 sensing and injection capacitors connect in series to replace multiple 1210 capacitors. The smaller capacitors simplify component procurement as components are readily available and not supply-constrained.

Amid a continual focus on EMI, particularly in automotive applications, an active filter using voltage sense and current injection enables a low EMI signature and ultimately leads to a reduced footprint and volume, as well as an improved solution cost. The integration of an AEF circuit with a synchronous buck controller helps resolve the trade-offs between low EMI and high power density in DC/DC regulator applications.