How to Select a MOSFET – Battery Protection

In the fifth post of this series, I discussed some considerations for selecting a MOSFET for use as a load switch, specifically for small-signal applications. In this post, we will look at a very similar function in which a MOSFET is used for battery protection.

Every year, more electronic devices are powered by batteries comprising Lithium ion (Li ion) cells. . The high power density, low rate of self-discharge and ease of recharging have made them the preferred battery type for nearly all portable electronics – Nowadays, everything from the cell phone in your pocket to the electric cars millions drive to work on a daily basis are powered by Li ion batteries.. Despite their many advantages, these batteries also pose certain risks and design challenges that when not successfully mitigated can lead to catastrophic results. I don’t think anyone will soon forget the exploding Galaxy S7 devices tablets and subsequent recall in 2016.

A common way to mitigate the risk of this type of destructive event is to place MOSFETs in the charge and discharge paths that can sever the electrical connection between the battery and the rest of the electronics in the end circuit when the battery voltage is considered outside a designated safe range, or the IC detects an overcurrent surge during charging or discharging (see Figure 1).

Because this is not a fast switching application, once again you really only have to contemplate worst-case scenario conduction losses, which make the selection criteria of the MOSFET similar to that of the load switch. But there are some unique considerations that warrant a separate discussion to highlight those caveats that are specific to battery protection.

Because a battery-protection MOSFET is both fully enhanced and continuously conducting current, or entirely shut off to disconnect the battery voltage from the rest of the electronics, you can pretty much neglect switching parameters when considering FETs for this application. Instead, just like when selecting load-switch FETs based on their current-handling capability, resistance and package type are the two most important considerations. With this in mind, it makes sense to break down battery protection into three tiers of currents that different types of end equipment require and analyze the type of FETs used for each.

In the first tier are low-power personal electronics that run on one to two battery cells, like cellphones, tablets, smart watches or personal health trackers. The amount of current these devices consume while charging and discharging can be as high as a few amps or as low as a few hundred milliamps. It’s no secret that personal electronics designers are perpetually driving to reduce their product’s size (and weight) with every passing generation, so they select FETs for battery protection based on the criteria that they be as small as possible while still being capable of handling the maximum charge and discharge currents. Sometimes this means a chip-scale device like a FemtoFET™ N-channel MOSFET is a good choice.

Because the FETs are often placed back to back in these applications, blocking both the charge and discharge paths (as in Figure 1 above), sometimes integrating both devices into a single package in a common drain configuration is the most space efficient solution (Figure 2). TI has a number of integrated back to back devices, available both in chip-scale packages as well as small quad-flat no-lead (QFN) SON3x3 plastic packages.

Figure 2: Schematic for a common drain-configured FET integrated into a single package

The second tier of battery-powered devices are multicell handheld cordless power tools like drills, trimmers, small saws and home appliances like robotic vacuum cleaners. These devices can still be sensitive to size, but charge their batteries at considerably higher currents, generally above 10A. As such, designers generally use the lowest resistance D2PAK, TO-220 or in some cases QFN packages. It is possible, when necessary, to use multiple devices in parallel, particularly for larger tools like chainsaws and hedge trimmers,  but keeping the number of FETs to a minimum in order to maintain a small form factor is still important. Like motor-control FETs, the lowest resistance device in a given package is generally preferable; otherwise you would select a smaller package.

The third tier highest-power battery-charged applications – are electronic vehicles like e-bikes, e-scooters, even electric cars and busses. At this point, the current and power levels can be massive (hundreds of amps, several kilowatts of power), and there really is no way around paralleling multiple FETs for the charge and discharge path. I’ve seen designers parallel dozens of FETs on massive boards, usually using D2PAKs, heat-sink-mounted TO-220s or other thermally enhanced packaged devices (Figure 3). Except for smaller-design e-bikes, size is less often an issue and current-handling capability is the name of the game. Once again, this means selecting only the lowest-resistance FETs. The number of FETs required is a function of the resistance, the maximum ambient temperature, and the thermal impedance of the board and system as a hole. While back-of-the-hand calculations can get you in the ballpark, precisely nailing down the number of FETs required will usually require some rigorous thermal simulations. 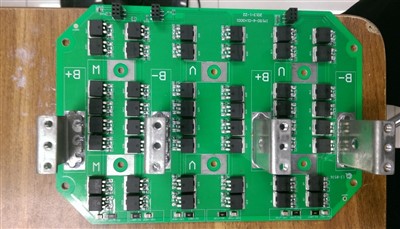 Figure 3: Dozens of D2PAK FETs paralleled on a large PCB for charge and discharge of the battery of an electronic vehicle

One last note on the use of battery-protection FETs in electronic vehicles –it is critical that you determine whether the end application requires Q101-grade FETs. Q101 is the automotive qualification grade from the Automotive Electronics Council (the discrete equivalent of Q100 for integrated circuits) that imposes much harsher quality and reliability requirements than are mandatory for commercial-grade devices. Whether your devices require Q-101 certification depends on the end application and a number of other factors, from the customer’s standards to the legislation of the country in which the vehicle will be operated.

E-bikes and e-scooters are generally less likely to require Q-101, but this is not always the case. Better to find this out before you build your design around FETs that you can’t put inside the final end equipment. TI does not offer any automotive-qualified FETs in its portfolio so if this is a requirement, your FET solution will have to come from elsewhere.

Thanks for reading! In my next and final blog in this series, we will be discussing the selection process for MOSFETs that are used for Hot Swap and other similar applications.