How to Select a MOSFET – Switch Mode Power Supply

Perhaps the most common use for high-performance power MOSFETs in the current marketplace also presents the greatest challenge in selecting the most appropriate FET. Never are the trade-offs between performance, price and size more muddled than in the case with MOSFETs used in switch-mode power supplies (SMPSs).

Traversing an exhaustive list of SMPS topologies, both isolated and nonisolated, and listing the most important considerations for each would probably take a novel – and an applications expert with far more technical knowledge than a simple marketing engineer like me. But I do hope that in the proceeding paragraphs of this blog, I can offer at least a few tips and traps to avoid.

Most SMPS applications in today’s market operate at relatively high frequencies, from 100kHz all the way into the megahertz range. That means that unlike low-frequency applications like motor control, FET selection is not just about resistance and conduction losses. The higher the frequency, the greater the switching losses, which means that the best-performing or highest-efficiency FET is the one that best optimizes the trade-offs between low gate (and other) charges and low on-resistance, RDS(on).

Speaking of charges, it’s not all necessarily about gate charge either. The gate charge, QG, dictates the FET’s ability to turn on and off quickly, an important consideration for hard-switching applications where the faster the turn off, the less duration of voltage/current overlap. That is why the classic MOSFET silicon figure of merit (FOM) is RDS(ON) * QG, with the lowest value indicative of the best performance. But other switching parameters can be as – or more – important depending on the application. During high-side switching, stored energy losses, EOSS, dictated by output capacitance, COSS, can have a large impact on overall system efficiency (see Figure 1). 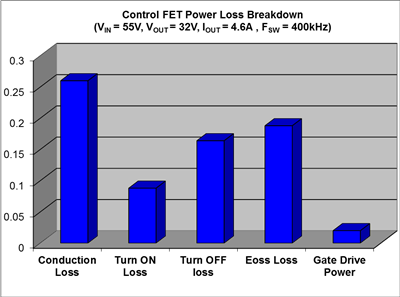 Figure 1: Power-loss breakdown of the control FET in a buck converter application

In order to achieve the higher efficiencies that contemporary power-supply energy standards demand, MOSFETs are replacing the sockets historically maintained by diodes to serve as synchronous rectifier switches (see Figure 2). For synchronous rectifier FETs, reverse-recovery losses dictated by the reverse-recovery charge of the MOSFET’s body diode, QRR, can often be the biggest contributors to power loss next to those conduction losses. For such applications, a more relevant FOM is RDS(ON) * (1/2 QOSS + QRR). Figure 3 shows a power-loss breakdown for an 80V MOSFET used in a typical synchronous rectification application.

Figure 2: In many applications, a low-resistance MOSFET replaces the rectifying diode to improve efficiency 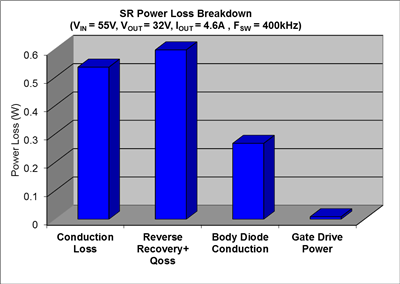 Within a given FET technology for which respective FOMs are relatively equal, the lower the resistance, the higher the gate charge. Therefore, the most efficient solution is one that optimizes the respective contributions of both conduction and switching losses.

Consider a recent example in which a TI customer wanted a recommendation for a synchronous rectifier FET (for a given set of input conditions and specific output current). Figure 4 shows the respective conduction and switching losses for five different resistance FET options available. Note that the fourth and fifth options yielded very similar total power losses under these conditions, where the curve is more or less flat between the two. However, the fifth option is 2x the resistance of the fourth. Within a FET technology, resistance is inversely proportional to die size, so you can assume (correctly) that the fifth option is a significantly more cost-effective solution. 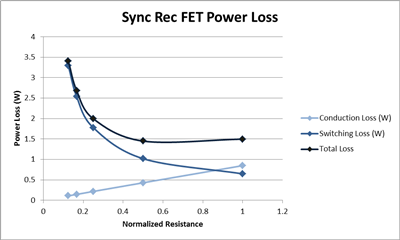 A few last points to consider:

If this post has only served to further muddy the waters and make the FET selection for SMPS applications appear more complicated than you previously thought, that was by design. FET selection is no trivial task and should not be treated as such. However, in the next installment of this series, I will discuss one extremely useful tool that TI has developed to make the selection of MOSFETs for one particular SMPS application – synchronous buck converters – as simple as plugging in a few parameters and analyzing the performance vs. cost trade-offs. Questions? Please feel free to leave a comment below.