When I first got into cooking, I preferred to do it alone, thinking that having anyone else in the kitchen was a distraction. But as I started to cook more complicated recipes with multiple steps, I found that having a second pair of hands was invaluable and made the experience more fun. The saying is true: if you can’t beat them, join them.

The same principle applies with the active clamp flyback.

Everyone wants a smaller AC/DC converter, especially when it’s for their phone or tablet charger. Due to its simplicity, the flyback converter is the topology of choice, since it effectively converts AC to DC with few components. But there are limits to how small a flyback can be, since the losses associated with the leakage inductance of the transformer limit the practical size. Until now, every design has fought it by minimizing this leakage inductance.  But the active clamp flyback breaks this cycle. 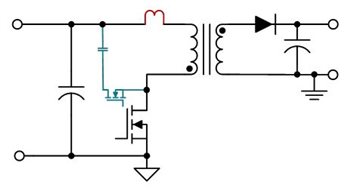 Rather than fighting the leakage inductance by dissipating the energy in a resistor-capacitor-diode (RCD) or Zener clamp, an active clamp stores the energy and delivers it to the output. Intelligently controlling the clamp also provides zero voltage switching. This eliminates two major sources of loss, enabling the size to be drastically reduced. If you were to use gallium nitride (GaN) field-effect transistors (FETs) with their lower output capacitance and on-state resistance, the size of the adapter can be cut in half!

But the devil is in the details, since if the active clamp is not intelligently controlled, it will actually make the efficiency worse. The active clamp flyback had been only a pipe-dream, since there was no controller intelligent enough to enable this topology. But this has changed with the UCC28780. This active clamp flyback controller is specifically designed to work with silicon (Si)- or GaN-based power stages, making this topology a reality for any design. The UCC24612 synchronous rectifier enables compliance with U.S. Department of Energy (DoE) Level VI or Code of Conduct (CoC) Tier 2.

You can explore the UCC28780 and UCC24612 and learn about other ways TI is giving engineers the power to innovate, design and learn by visiting booth No. 501 at the Applied Power Electronics Conference (APEC) in San Antonio, Texas, March 4-8, 2018.