IoT’s impact on global power consumption comes down to standby

Thought about the environmental impact of the Internet of Things (IoT) lately?

Having spent years in the electronics industry, I find it increasingly rare that a news item generates a jaw-dropping response. But I admit, when I read that the G20 had agreed during their November 2014 meeting in Australia that networked devices would be one of six priorities in their Energy Efficiency Action Plan, it caught my attention. Networked devices! Right there with better-publicized efficiency and emission efforts for vehicles and electricity generation!

The shocking part was the problem statement in the report: “With the global trend toward an ‘Internet of Things,’ the IEA [International Energy Agency] estimates that up to 50 billion devices may be connected to networks by 2020. Already, the annual standby power consumption of networked devices is estimated at over 600 terawatt hours. This is greater than Canada’s total annual electricity consumption in 2011. By 2025, global standby power consumption is projected to nearly double.”

Everyone is aware that IoT has progressed from pre-market hyperbole into the early stages of deployment, especially in home and building automation. This progression is drawing merger and acquisition activity as well as robust consumer promotion from top-tier suppliers, such as AT&T with their Digital Life campaign. But adding the total annual electricity consumption of Canada on top of our already stressed power grids and straining planet? Now that’s something.

The report does go on to state that the deployment of IoT will actually help drive conservation efforts, with home automation and building automation, convenience and conservation are the primary benefits. Still, with the multitude of problems facing us, having the G20 cite networked devices as a top conservation priority should not be lightly dismissed; more aggressive standards should be warrantedFortunately, as is often the case, the electronics industry is ahead of the regulators.

Many of the IoT subsystems embedded in products are powered directly off the alternating-current (AC) mains to simplify power-supply design, ease testing and regulatory compliance, and provide portfolio scalability. The expansion of the so-called Smart AC plug from exclusively a retrofit product into a core component in deployments is also another key driver powering the IoT subsystem directly from the AC mains.

Designers are broadly adopting the UCC28880 low-quiescent-current offline switcher to power these offline IoT systems. In addition to its small size, relative low cost and low electromagnetic interference –EMI achieved by integrating its own low-voltage supply and switching field-effect transistor – it is exceptionally well suited to contribute to any IoT subsystem power consumption reduction strategy. With high efficiency (Table 1), low standby power (Figure 1) and the industry’s lowest quiescent current (below 100µA), it’s worth checking out the design tools available for the UCC28880.

To all the tireless professionals working within governments, standards bodies and the industry to make our planet a better place, to paraphrase Ronald Reagan, we’re here to help. 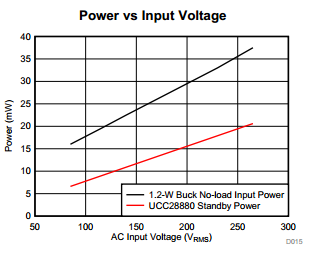