LDO Basics: Thermals – How hot is your application?

A low-dropout (LDO) regulator’s nature is to regulate a voltage by turning excess power into heat, making this integrated circuit an ideal solution for low power, or small VIN to VOUT differential applications. With this in mind, choosing the right LDO with the right package is crucial to maximizing an application’s performance. This is where some designers have nightmares, since the smallest available package isn’t always a perfect fit for the desired application.

One of the most important features to consider when selecting an LDO is its thermal resistance (RθJA). This feature illustrates how efficient the LDO is at dissipating heat in a specific package. Higher RθJA values indicate that a package is not very effective at transferring heat, whereas lower values indicate that the device transfers heat more effectively.

RθJA will typically be higher for smaller packages. For example, the TPS732 has different thermal resistance values depending on its package: the small-outline transistor SOT-23 (2.9mm by 1.6mm) package thermal resistance is 205.9°C/W, compared to the SOT-223 (6.5mm by 3.5mm) package’s 53.1°C/W. This means that the TPS732 will experience a rise of 205.9°C or a 53.1°C per 1W dissipated. You can find these values on the device’s datasheet under Thermal Information as shown in Table 1.

Do you have the right package?

The recommended operating junction temperature of an LDO is anywhere between -40°C to 125°C; again, you can check these values on their respective datasheets as shown in Table 2.

What these recommended temperatures mean is that the device will operate as stated in the Electrical Characteristics table of the datasheet. You can use Equation 1 to determine which package will operate at the right temperature:

Where TJ is the junction temperature,

TA is the ambient temperature,

RθJA is the thermal resistance (from the data sheet),

PD is the power dissipation and

Iground is the ground current (from the data sheet).

One clear design solution is to use the bigger package, since it operates at the recommended temperature.

Here are some tips and tricks to minimize heat.

When power dissipates, heat escapes the LDO through the thermal pad; therefore, increasing the size of the input, output and ground planes in the printed circuit board (PCB) will decrease the thermal resistance. As shown below in Figure 1, the ground plane is usually as large as possible and covers most of the PCB area not occupied by other circuit traces. This sizing guideline is due to the returning current from many components and to ensure that those components are at the same reference potential. Ultimately the contact planes help avoid voltage drops that can hurt the system. A large plane will also help increase heat-sinking ability and minimize the trace resistance. Increasing copper-trace size and improving the thermal interface significantly improves the conduction cooling efficiency. 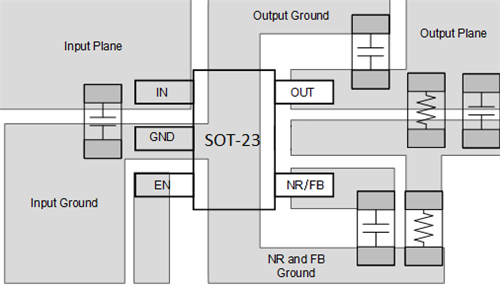 When designing a multilayer PCB, it’s usually a good idea to use a separate layer covering the entire board with a ground plane. This helps you ground any component without the need for additional traces. The component leads connect directly through a hole in the board to the layer containing the ground plane.

Heatsinks decrease RθJA, but add size and cost to the system. When selecting a heatsink, the base plate should be similar in size to the device to which it attaches. This will help evenly distribute heat over the heatsink surface. If the heatsink size is not similar in size to the surface to which it attaches, the thermal resistance will increase.

Figure 3: Resistor in a series configuration

Since the LDO needs to stay in the saturation region to regulate properly, you can obtain the minimum input voltage by adding the desired output voltage plus the voltage dropout. Equation 2 expresses the setting of these two LDO properties:

Using the conditions in the TPS732 example (regulating 5.5V to 3V using 250mA), you can use Equation 3 below to calculate the maximum value of the resistor and the maximum power it can dissipate:

Make sure to select a resistor so as not to exceed its “Dissipating Power Rating”. The rating indicates how many watts the resistor can turn into heat without damaging itself.

There are many ways to execute an efficient, size-conscious and low-cost thermal solution for an application. The key lies in early design considerations in order to have all options available. Selecting the proper components is not an easy task when managing thermal considerations, but the right devices and techniques will facilitate a successful design process.