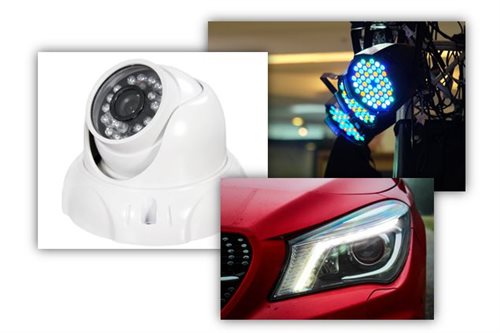 In one of my previous blog posts, I introduced different dimming methods for light-emitting diode (LED) drivers: analog and pulse-width modulation (PWM) dimming. In this post, I will elaborate more on PWM dimming and how to get its frequency fast enough in order to reduce its effect on humans or other living creatures.

Let’s review why PWM dimming is preferable to analog dimming in some applications, such as rear lamp. The brightness and color of an LED depends on the current flowing through. Once the current changes, the brightness and color change accordingly. Some older red LEDs might even change from red to orange because of flowing current-level changes. This is not desirable in rear lamp that requires precise color control per governmental regulations. The concept of PWM dimming is to leverage the slow response of human eyes by quickly turning the LED on and off (at a frequency above 100Hz) without changing the LED current flowing through during turn-on time. Since human eyes are not responsive to any frequency above 30 Hz, brightness seems linearly changing according to the duty cycle of the PWM signal as seen by human eyes. LED color is preserved this way.

While PWM dimming provides advantages in LED brightness control, are there any drawbacks? Yes:  it comes down to the quality of light with PWM dimming and its effect on different objects. PWM dimming involves frequency. Low-frequency dimming is in the 100Hz to 2kH range, making it perceptible by humans (subtly) and inducing eye strain or fatigue. A banding effect might occur when taking photos or recording videos if the dimming frequency is in such a range. PWM dimming can also create the stroboscopic effect, which is when moving/rotational objects look stationary. In short, to use PWM dimming and avoid its drawbacks, you should set the PWM dimming frequency higher than 2kHz.

How about connecting a switch parallel to the LEDs? When the switch is off, current flows through the LEDs and shines light; when the switch is on, current flows through the switch and there is no light. This method is called shunt-FET dimming. You will need a fast-responding LED driver that enables abrupt changes in load, yet maintains good current regulation and prevents current overshoot from destroying the LEDs. With the nature of hysteretic converters or constant on-time converters that don’t form feedback loops, the response on the variation of output voltage is fast and the load change is instant. By using shunt-FET dimming with these type of drivers, current is continually flowing and regulated accordingly, regardless of whether the dimming switch is on or off. From the light-output perspective, the brightness depends on the duty cycle of the switch off-time. Thus, you can achieve linear brightness changes according to the duty cycle of a high-frequency (>2kHz) PWM signal.

To enable high-frequency PWM dimming with a shunt-FET dimming approach, TI provides fast-responding LED drivers such as the LM3409, a controlled off-time hysteretic PFET buck LED controller; the TPS92641, a constant on-time synchronous buck controller; and the TPS92515, a monolithic 2A controlled off-time hysteretic buck LED converter. All of these devices work well with shunt-FET dimming and exhibit superb performance given their small board size and high power conversion efficiency. Shunt-FET dimming with a hysteretic LED driver is the way to improve the quality of LED lighting by enabling high-frequency PWM dimming.