With the Federal Aviation Administration restricting the size of batteries allowed on airplanes, it can be challenging to design applications with batteries down to 100 Wh. Some companies design applications using two small batteries instead of one to meet the regulations, but having two batteries often requires the implementation of redundant or duplicate power supplies, which increases power-path design complexity.

In this article, I will present a simple yet effective configuration to share the load current between multiple power supplies or batteries using two TI LM74700-Q1 ideal diode controllers. This configuration enables you to use multiple batteries or power supplies in your systems and is appropriate for applications such as oxygen concentrators, laptops and portable oscilloscopes.

For systems that include multiple batteries, the load-sharing configuration shown in Figure 1 can dramatically increase battery life because each battery supplies only half of the total load current at a time. 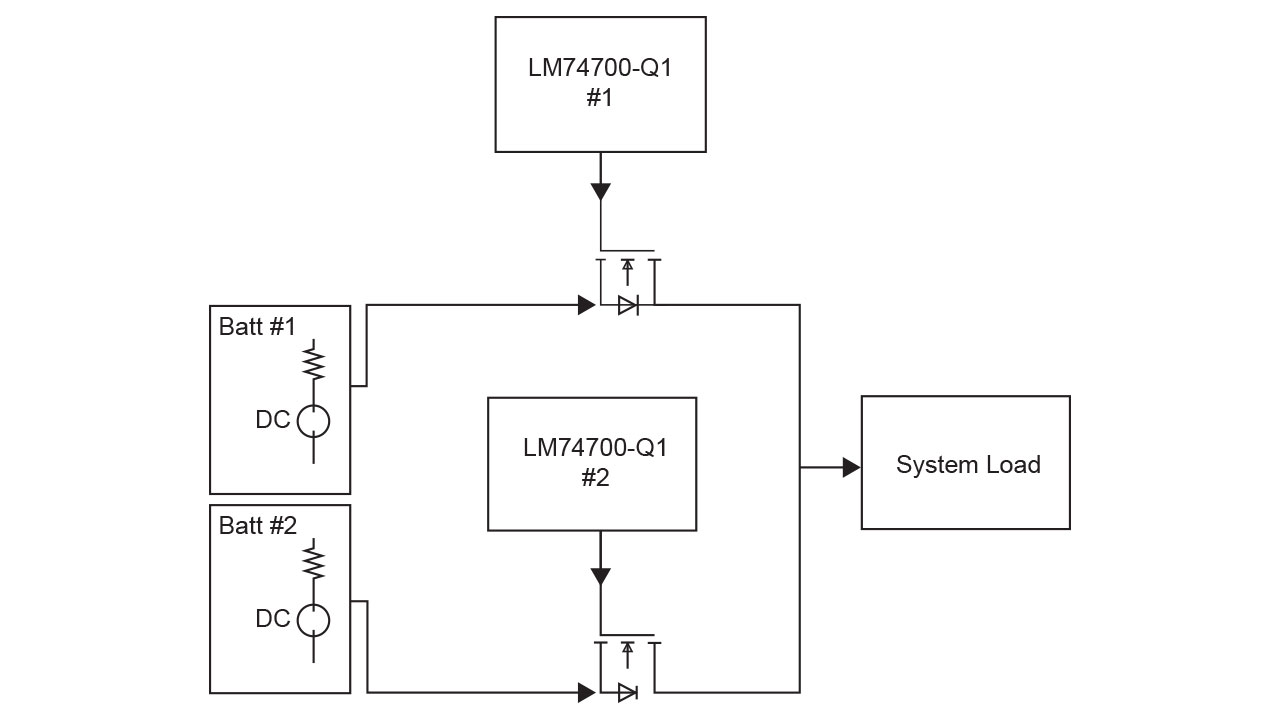 Supplying only half of the total load current reduces the I2R across the batteries’ internal impedance by a factor of 2, as shown in Equations 1 and 2: 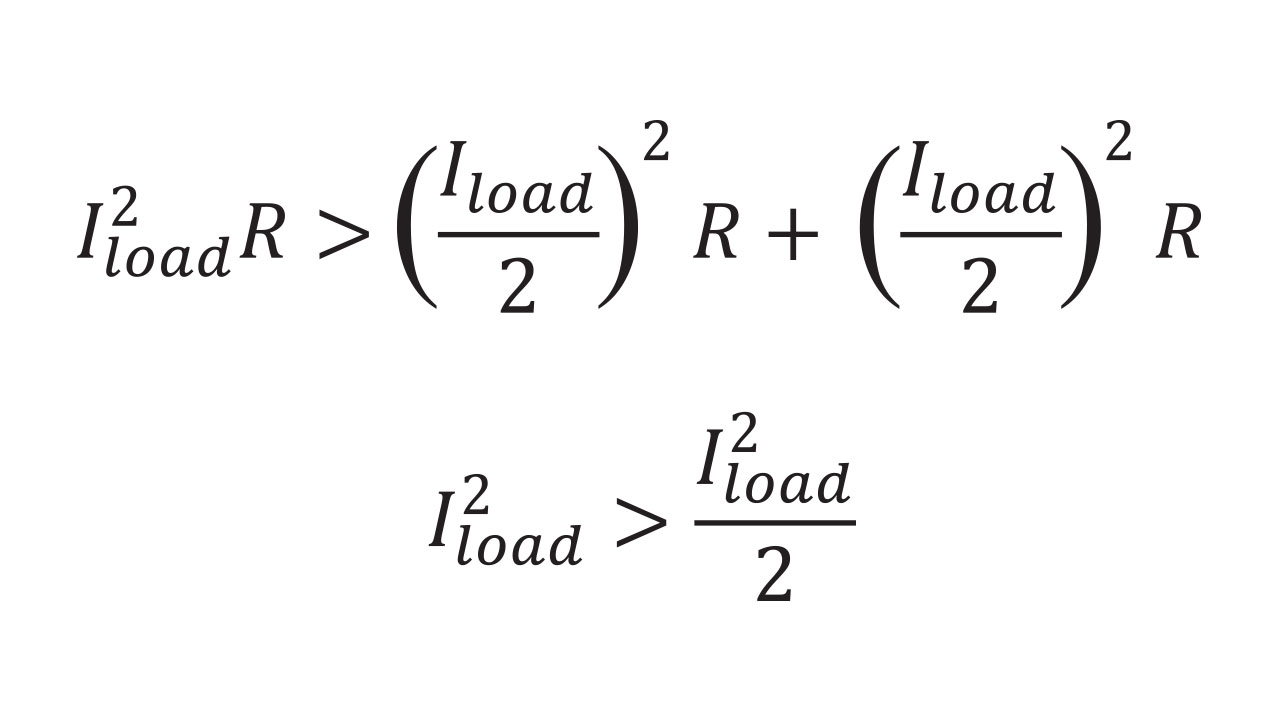 When implementing multiple batteries in a system, you cannot assume that two batteries that seem the same are exact copies of each other. They may have different internal impedances or discharge at different rates, which may cause backfeeding or a battery that sources no current. Using the LM74700-Q1 enables each battery to source current proportional to its voltage.

To illustrate this capability, Figure 2 shows the current draw from two 9-V batteries sourcing a constant current load. One battery was new and the other had been partially drained. 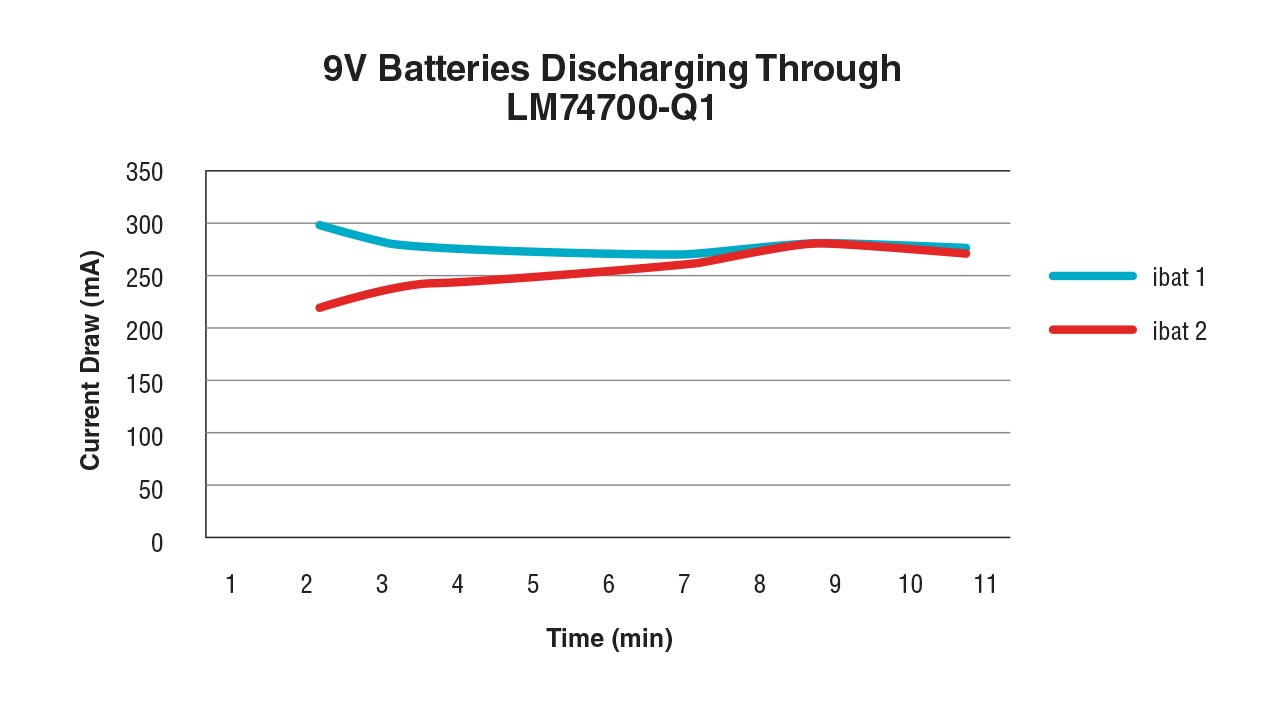 The LM74700-Q1 has an integrated charge pump, which enables the LM74700-Q1 to control N-channel field-effect transistors (FETs) that see as much as 65 VDC across them. The charge pump is able to fully saturate the FETs with a gate voltage up to 15 V above the source.

Implementing an ideal diode controller that uses N-channel FETs as opposed to P-channel FETs is a good fit for battery-powered systems (or any efficiency-driven system). An N-channel FET will typically have a lower RDS(on), a smaller package and a lower gate-charge threshold than a typical P-channel FET with similar voltage ratings. Having a lower RDS(on) FET will further reduce I2R losses in a system’s power path, and a lower gate-charge threshold will enable the FETs to turn on and off more quickly.

To minimize losses and optimize the transient response, proper FET selection is important. Using a LM74700-Q1 ideal diode controller greatly reduces DC conduction losses compared to losses when using a Schottky diode or even P-channel FET implementations. There are a few key parameters to consider when selecting the right N-channel FET for your design, however. If you need the FETs to toggle on and off quickly, then inspect the gate charge (Qg) parameter specified on most TI N-channel FET data sheets. The relationship between the Qg and gate-drive current (Ig) to the time it takes to toggle a FET on and off can be seen in Equations 3 and 4: 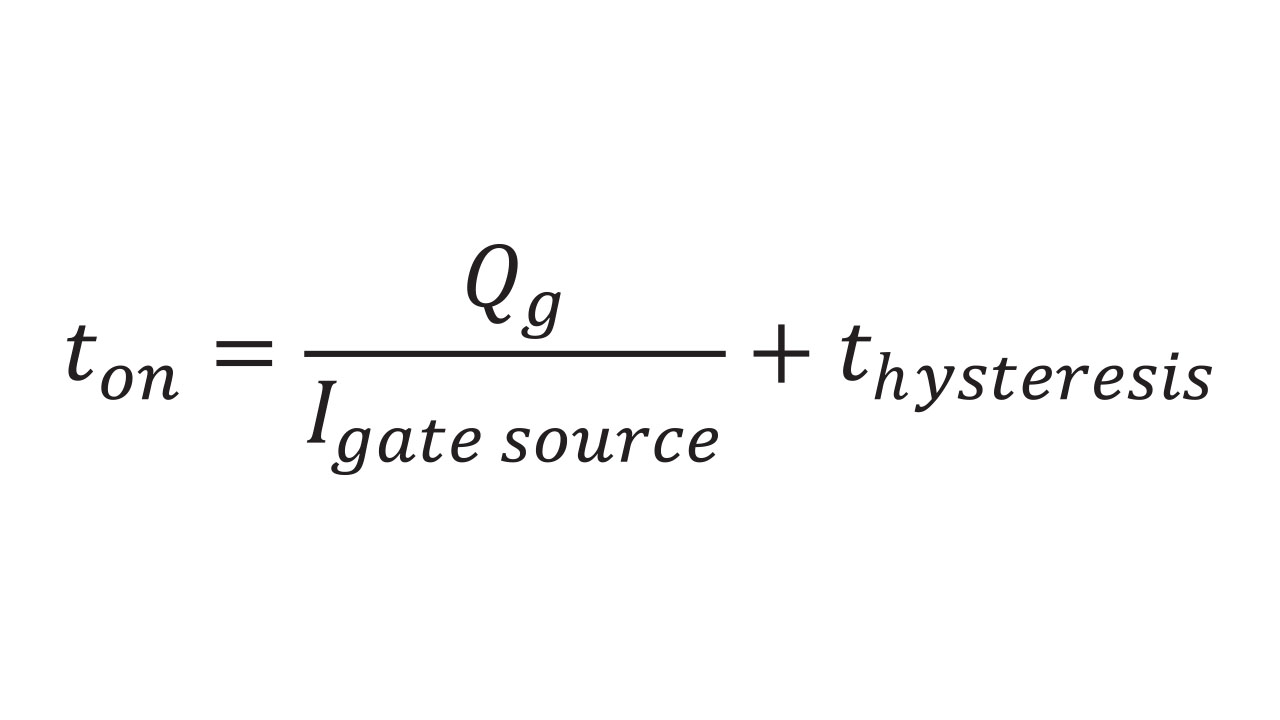 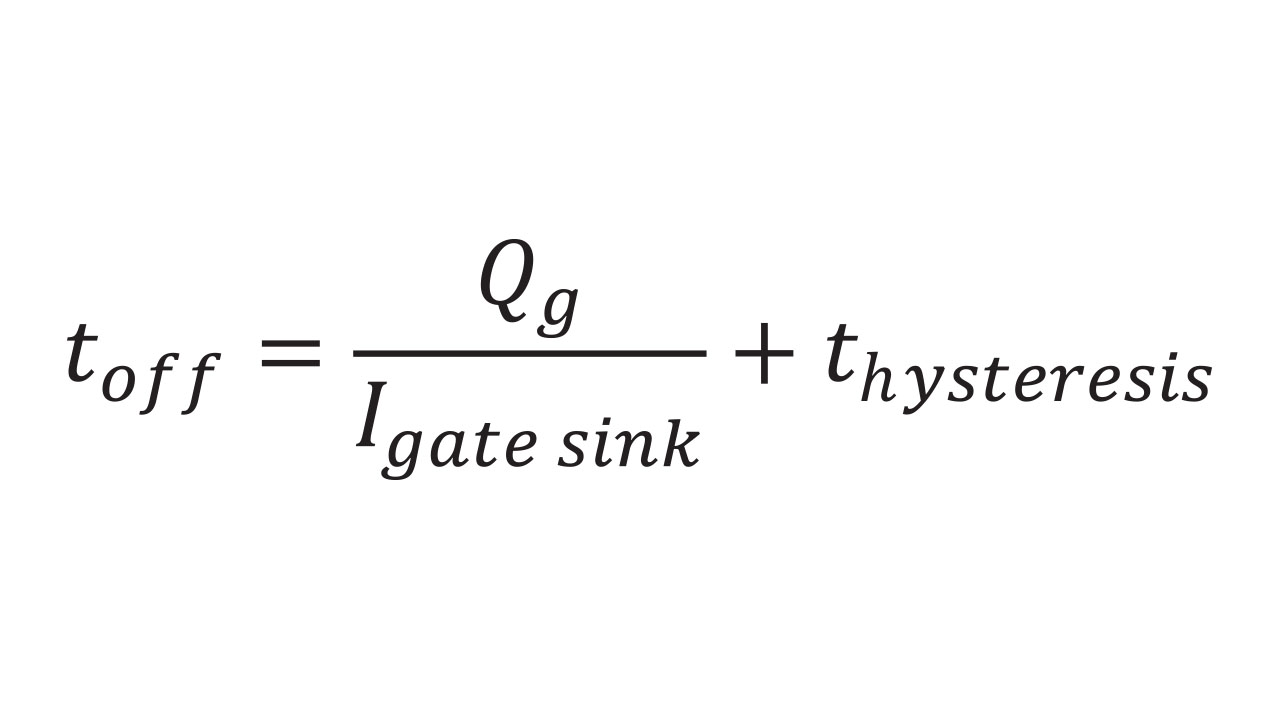 The gate-drive current for the LM74700 is 11 mA and the gate-sink current is 2,370 mA. Having such a high lg can lead to a faster response time for a system, whether it is a turnon and turnoff command or a reaction to a higher voltage detected on the output. A fast transition ensures that your batteries are protected from any overvoltage events on the output and minimal holdup capacitance is required when transitioning between battery power and a DC power source.

In order to have a balanced current draw on multiple power supplies used in a system, an equivalent resistance in the discharge path is important, as shown in Figure 3. Having a difference in voltage or resistance between batteries will affect the ability to equally source current. 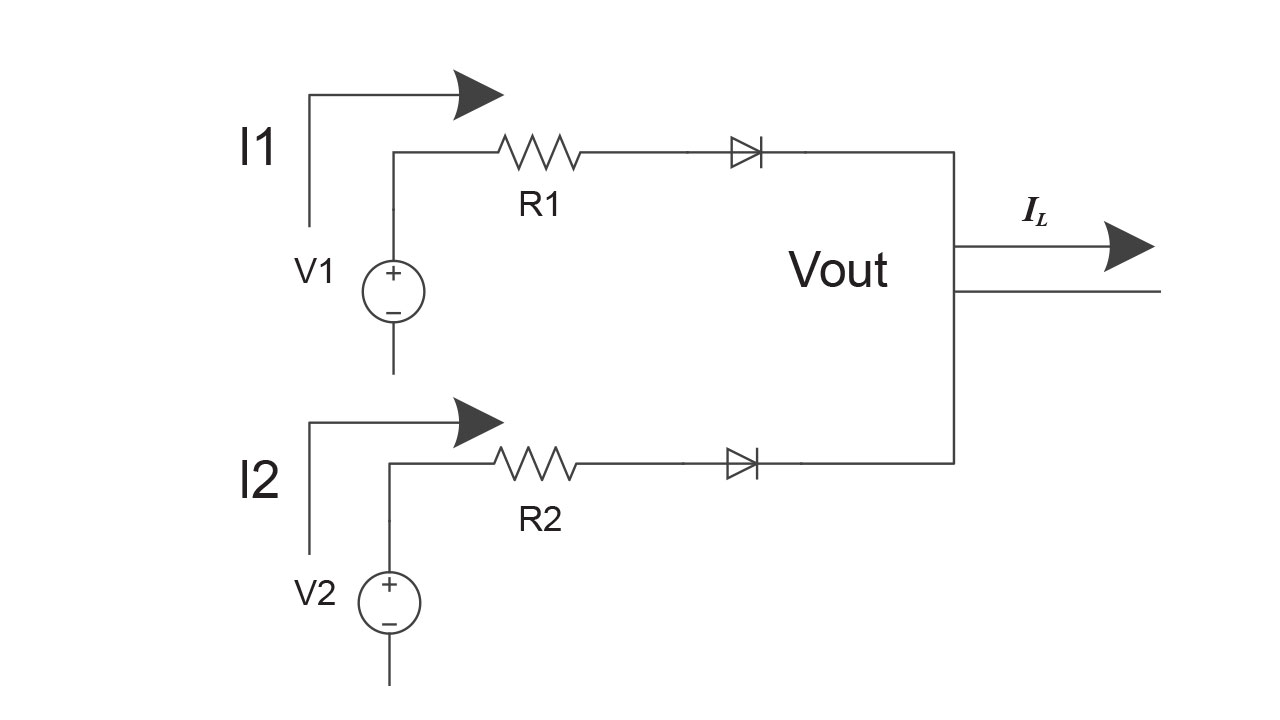 Figure 3: Schematic of an equivalent resistance in the discharge path

As you can see in Equations 5 and 6, even if the same source voltages exist in a system, a difference in series resistance can vary the amount of current they will provide. Consider this possibility when implementing systems with multiple chemistries or ages, as they may have different internal impedances. 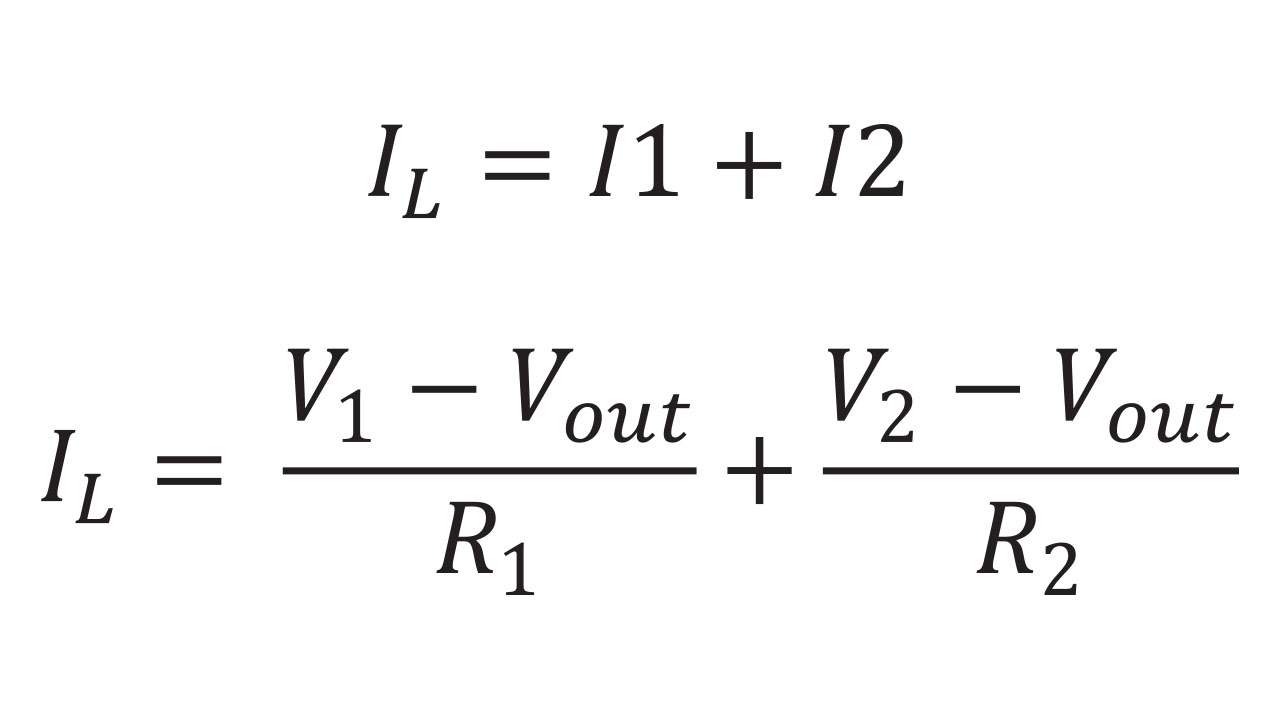