As more and more features are packed into industrial and automotive electronic systems, smaller, robust packages become even more attractive. However, to ensure that the electronic design is thermally robust, you need to have a proper understanding of the various package options. This is particularly true of linear regulators where input to output voltage differences can be large and cause immense power dissipation. There are two main types of packages: surface mount and through hole. 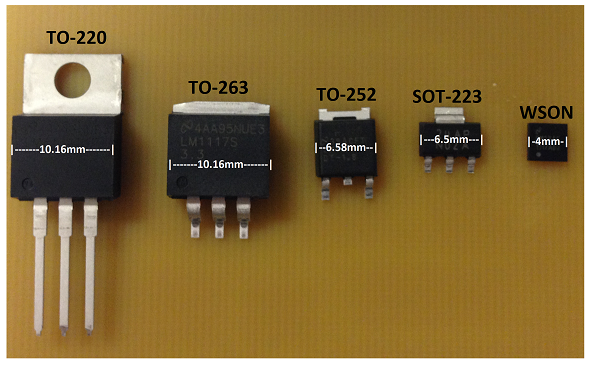 Through-hole packages, such as the TO-220, require vertical mounting (or leads bent at 90 degrees) and holes drilled through the PCB, often obstructing potential routing layers underneath. Through-hole mounting is typically used when components are mounted by hand and PCBs are single or double sided. With pick-and-place technology and multiple board layers, surface-mount packages are now more common. If you are considering only surface area, the SOT-223 and the WSON would be good choices.

Input voltages in industrial applications can range from 12V and 24V backplane rails to off-line supplies that can be much higher. Automotive battery voltage, while nominally 12V and 24V (for car and truck), can have excursions due to cold crank and load dump conditions. A wide input to output voltage range is, thus, quite common. Depending on the load current, this could cause high levels of thermal dissipation in the voltage regulators leading to the use of packages, such as TO-263 and TO-252, traditionally considered thermally more efficient. Portable and hand-held applications often run on batteries or lower input voltage supplies with mostly low currents. These applications are space-constrained and often lean towards smaller footprint packages such as WSON or SOT-223. However, with proper PCB design and/or a package with a thermal pad (which helps dissipate heat through the PCB), one can get the best of both worlds: small size and high heat dissipation capabilities.

As an example, TI’s LM1117-N WSON package shown in figure 2 has θJA = 40 °C/W. This is, to some extent, due to the thermal pad which allows for better heat dissipation. The SOT-223 package, shown below in figure 3, is considered to have poorer thermal resistance than TO-263 and TO-252 packages. 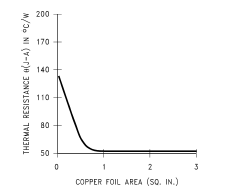 With proper PCB design, one can take advantage of the smaller size of the LM317A in a SOT-223 package and still get great thermal resistance.