Power Tips: How to design a robust series linear regulator with discrete components 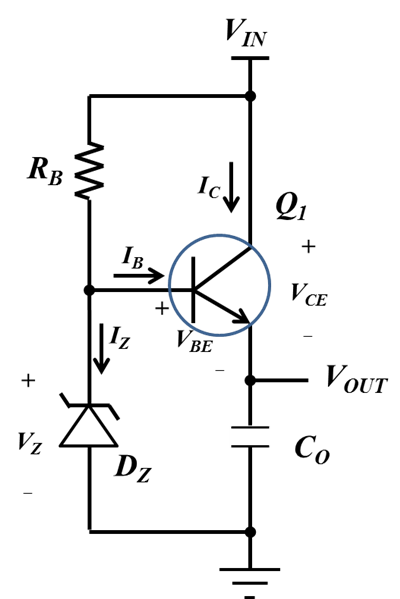 There are two design challenges related to the circuit shown in Figure 1. The first challenge is to regulate output voltage, and the second challenge is to survive a short-circuit event. In this post, I will discuss how to design a robust linear regulator with discrete components.

Here is an example used to power a microcontroller:

The NPN bipolar transistor, Q1, is the most important component. I selected this device first. The transistor should meet the following requirements:

Here are the key characteristic of the NPN transistor I used.

For this application, I used a test condition of IZT = 1mA and selected a zener diode with the following characteristics:

The resistor, RB, provides current for both the zener diode and transistor base. It should provide sufficient current over the operating conditions. The zener diode reverse current, IZ, should be greater than 1mA, as I discussed in the “zener diode, Dz selection” section. Equation 2 estimates the maximum base current required for operation:

Equation 3 calculates the value of RB. I used a resistor with 1% tolerance.

Output voltage is at its maximum when the load current is zero. With 1mA ≤IZT ≤ 5mA, the maximum VZ is 3.8. . VBE(on) should be greater than 0.1V so that the output of the regulator meets the requirement. I added a dummy load resistor to draw a collector current for a no-load condition. 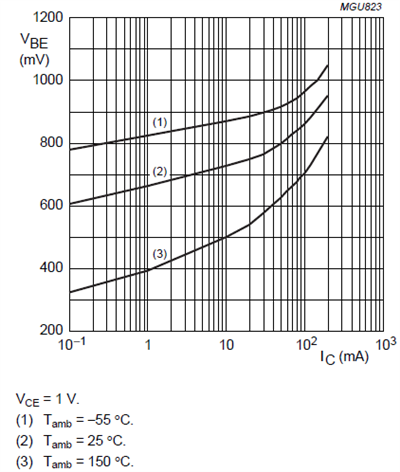 I added a 36kΩ resistor to the circuit, as shown in Figure 3. 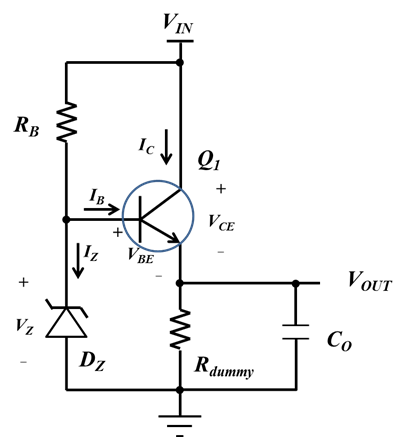 Current limiting for a short-circuit event

Shorting the output of the circuit shown in Figure 3 to ground will result in high collector current. A PSPICE simulation result shows that the collector current could be as high as 190mA; see Figure 4. 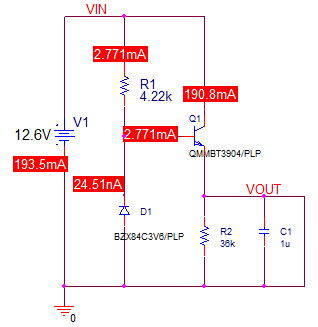 To limit the short-circuit current, I added a resistor, RC, from VIN to the collector of the transistor, Q1, as shown in Figure 5. 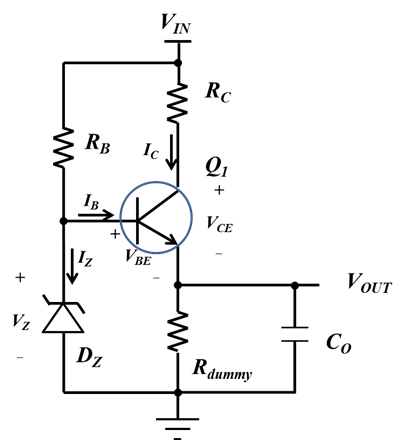 The resistor, RC, will meet the output-regulation requirement and is capable of dissipating power during short-circuit events. I calculates the value of RC:

VCE_Test is the collector-emitter voltage used in Figure 1. I selected a 5% tolerance resistor for RC. Using Equation 5, RC should be less than 271Ω. With this estimated value, Equation 6 calculates the worst-case power dissipation on RC in a short-circuit event:

The power dissipation is about 0.56W. I selected a 1W, 270Ω power resistor. For applications with much higher short-circuit power dissipation on RC, you can put multiple resistors in series to share the power.

For the transistor, Q1, the worst-case power dissipation is not during short-circuit event because of the current-limiting resistor, RC. The power dissipation on Q1 during normal operation is a function of the collector current, as shown in Equation 7:

The worst case happens when:

In this post, I described the design guidelines for a robust, low-cost linear regulator with discrete components.  This design process proves that integrated linear regulator from Texas Instruments provides much better output regulation and complete protections again over-voltage, short-circuit and over temperature.