As electronics increase in complexity, designers of even simple systems are running into issues associated with multiple power rails. One challenge with having multiple power rails is often the sequencing of the enable signals, because the startup order and timing of these rails can be strict.

The LM3880 and LM3881 analog power-supply sequencers offer a simple method to control the power-up and power-down sequencing of multiple independent voltage rails. By staggering the startup sequence, it is possible to avoid latch conditions or large in-rush currents that can affect system reliability. The LM3880 has fixed time-delay options for sequencing, while the LM3881 offers variable time delay based on an external capacitor.

One of the most common places you’ll see this need is in a system that includes a field-programmable gate array (FPGA) and/or processors and controllers such as a digital signal processor (DSP) or a microcontroller unit (MCU). Figure 1 shows an example of how you might use the LM3880 or LM3881 in such a system. 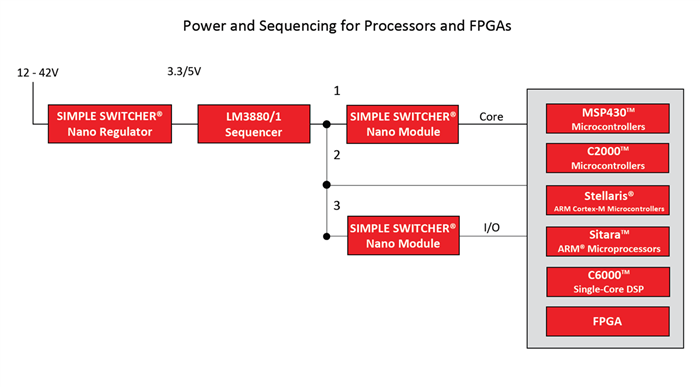 Figure 1: Using the LM3880 or LM3881 for sequencing processors and FPGAs

As you can see, a single LM388x controls up to three voltage rails on its own. You can, however, cascade multiple LM388x devices together in order to sequence additional rails. Each device you add allows you to sequence three additional rails, although if you require sequencing for more than nine rails, it is best to consider a PMBus high-rail-count digital sequencer like the UCD9090A, which can handle 10 rails.

Logic gates can also be useful if you require supervision and monitoring of the rails. You can add three AND gates to the system in-between each rail and between the third rail and a power-on status flag to monitor when all devices are fully powered on. With this simple modification, the power-on status will go active immediately after all three rails power up and will go inactive when the enable turns off, showing that the device is beginning its power-down sequence. Figure 3 shows this application circuit. 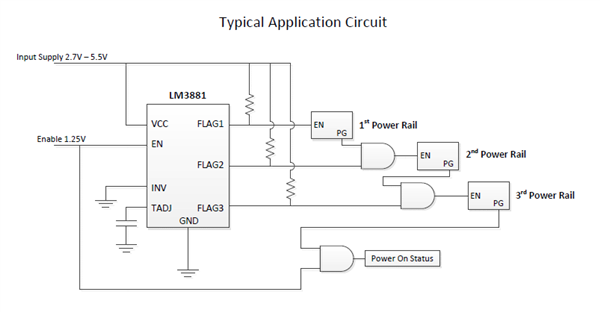 With all of these capabilities, how does the LM388x stack up against other potential solutions? Against more feature-rich (and complex) digital sequencers that provide more functionality (with higher system cost), the LM388x maintains its edge with ease of use, requiring no programming whatsoever, and a very low-cost system approach at nearly tenth the cost of the cheapest digital sequencers. Against a basic discrete solution, the LM388x once again wins when it comes to ease of use, as you can add it to a system as a single device in most cases, allowing not only power-up sequencing but power-down sequencing as well. Compared to other simple analog sequencers, the LM3880 and LM3881 are much simpler; except for a small timing capacitor in the LM3881’s case, they require no external components.

Do you have any sequencing issues? Post a comment below or ask a question on the TI E2E™ Community Sequencers forum.