A switching regulator is an efficient device when you need to perform step-down power conversion. The wide input-voltage (VIN) space (which TI considers >30V) has seen an increased usage for these products due to new applications.

Figure 1 shows major applications with wide VIN, along with their nominal bus operating voltage ranges and the transient range that the DC/DC converter will see. Within these applications, the emergence of 48V batteries for automotive and high-cell battery applications such as e-bikes, GPS trackers and drones translates into a growing need for wide VIN up to 48V. The >48V space requires that DC/DC converters withstand transients as high as 100V caused by things like load dump, lightning strike and back-electromotive force from motors, while still regulating 12V and 5V outputs. 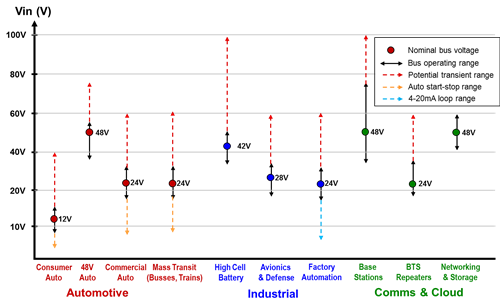 Designers traditionally dealt with these transients by putting clamping circuitry on the front end so that the converter doesn’t see the spike. Figure 2 shows an automotive system example where the front-end circuitry adds over a dozen components to the design. All of these components add up as additional cost and space. Also, as the voltages get higher, the ratings of critical components such as diodes and capacitors increase as well, which exponentially increases cost.

TI’s lineup of wide VIN DC/DC Fly-Buck™ converters, which operate up to 100VDC, avoid these issues.

Figure 3 shows TI’s wide VIN constant on-time (COT) buck converter portfolio. Not only do these converters eliminate the clamping circuit, but the COT architecture further simplifies designs because it requires no compensation and can maintain high step-down ratios, eliminating intermediate rails. The nonsynchronous LM5007 and LM5009 have been popular in e-meters and power tools, while a lower-current synchronous device such as the LM5017, LM5018, and LM5019 is popular in the servo drive space.

You can configure TI’s LM5017, LM5018, and LM5019 synchronous converters for isolated bias supplies, making the parts optimal for amplifier bias, insulated gate bipolar transistor (IGBT) bias and communication bias such as RS-485. The advantage here is that the Fly-Buck™ topology doesn’t require any secondary feedback circuits such as optocouplers and transformer auxilary windings.

To address the higher-current needs of 100V converters (with motor drives and GPS trackers), the LM5161 has a 100V input voltage range and 1A current range. It is also TI’s first 100V regulator with AECQ-100 qualification, making it useful in 48V automotive applications. 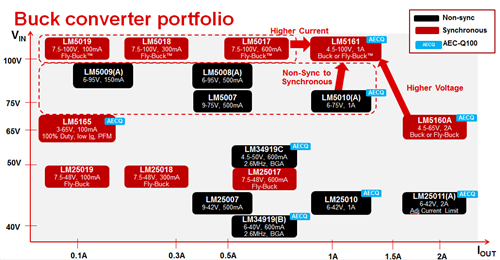 Traditionally, the 100V devices were developed to be used in telecom applications, but are now seeing use cases in automotive and multi-cell battery applications. While the 48V automotive and high-cell battery space is still emerging, like every technology trend, the power density is bound to increase as the applications mature. It will then be much more challenging to incorporate a clamping circuitry on the front end due to size constraints and the high voltage converters with higher current capabilities like the LM5161 will find more use cases. Read the white paper, “Valuing Wide VIN, Low EMI Synchronous Buck Circuits for Cost-Driven, Demanding Applications” for more information on this topic.