Step by step: How the series capacitor buck converter works

My cousin introduced me to the Texas two-step a couple years ago. I enjoyed swing dancing in college but had never tried two-step before. My first few attempts were quite abysmal. Fortunately, I was with friends and we could laugh about it. After several more tries, I was able to get the hang of it.

It can also be a little daunting to learn a new converter topology. You might be familiar with the conventional buck converter. The simplicity and beauty of this converter has made it popular for decades. TI recently introduced the TPS54A20 based on the series capacitor buck converter. It is a new topology that enables efficient, high-frequency operation of small point-of-load voltage regulators. 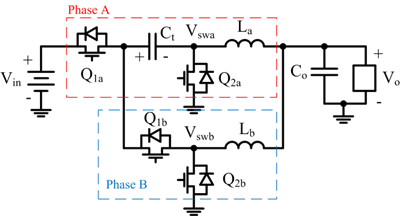 Today we are going to learn the “steps” of the series capacitor buck converter shown in Figure 1. Like any new dance, it may be challenging at first. After walking through the steps of steady-state operation a few times, I think you will find that it is not that difficult. You might even like it! This will be a brief beginner’s class; if you want more details, check out this application note. So let’s begin by considering a converter with a 12V input switching at 5MHz per phase.

The first step, or time interval, occurs when the high side switch of phase A (Q1a) is on as shown in Fig. 2. The series capacitor (Ct) connects to the input by switch Q1a. Because the nominal voltage across the series capacitor is half the input voltage (approximately 6V in this case), the phase A switch-node voltage (VSWa) is roughly half the input voltage, shown in blue in Figure 2. The phase A inductor current (ILa) rises in a triangular fashion just like a normal buck converter (no resonant behavior) and simultaneously charges Ct. In fact, the series capacitor current (ICt) is equal to ILa during this step. The differential series capacitor voltage (VCt) increases by a few hundred millivolts due to the added charge. During this step, the phase B low-side switch (Q2b) is on, connecting the phase B switch node (VSWb) to ground. The phase B inductor current (ILb) decreases linearly as a result.

Both low-side switches (Q2a and Q2b) are on during step two, as shown in Fig 3. This connects both VSWa and VSWb to ground just like a conventional two-phase buck converter. Both ILa and ILb have negative slopes. Because the series capacitor has no current flowing through it (because ICt is zero), VCt remains constant.

Step four is identical to step two as shown in Fig. 5. Q2a and Q2b are on and VSWa and VSWb are grounded. Both ILa and ILb ramp down. VCt remains fixed because ICt is zero. After step four, the whole cycle repeats.

Figure 5: Both low side switches on (step 4)

How was that? Not too hard, right? Check out the additional resources to learn more about this exciting new topology. Now it’s time to hit the design floor and take the series capacitor buck converter for a spin.