The effects of gate-driver strength in synchronous buck converters

The peak voltage at phase node, VPH, in a synchronous buck converter is one of the main specifications to determine converter reliability. Designers usually allow phase-node ringing to be as much as 85% to 90% of the MOSFET data sheet’s absolute maximum rating. This margin is necessary for long-term reliability of the converter since the circuit needs to safely operate over a wide range of ambient temperature (-400C to + 850C).

From the driver side, the main factor contributing to phase-node ringing is the gate-driver strength during the turn-on process of the upper MOSFET, FETUPPER. Let’s analyze its effects in a converter with different gate-driver resistance values.

Figure 1 shows the top level of a synchronous buck converter with the upper MOSFET gate-driver section. The FETUPPER requires a charge to turn on. This charge comes from the boot capacitor, CBOOT. The charging path starts from CBOOT, to RBOOT, to the pull-up driver P-MOSFET (DUP), the FETUPPER input capacitor and back to CBOOT. 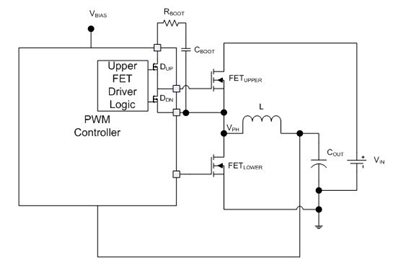 Figure 2 shows the rising edge of phase-node ringing with different gate-driver strength values. The waveforms are from the TPS543C20 evaluation board with VIN =12V, VOUT =1V, FSW = 500 kHz, ILOAD = 40A on. The peak ringing voltage of 6Ω DUP is about 6V higher than 8Ω DUP. The resistance value of DUP inside the TPS543C20 can be program via an external communication interface such as an I2C protocol. The waveforms are from the same device and same evaluation board to minimize variation from other components.

You might ask why the 6Ω DUP with a 2Ω boot resistor and the 8Ω DUP values do not have the same peak ringing voltage results. This is because the DUP behaves as a dynamic MOSFET, which requires time during the turn-on process, in comparison to pure resistance as RBOOT. As a result, the rising slope of a phase node with a 6Ω DUP and 6Ω DUP plus boot resistors has the same ratio and is faster than the 8Ω DUP slope. 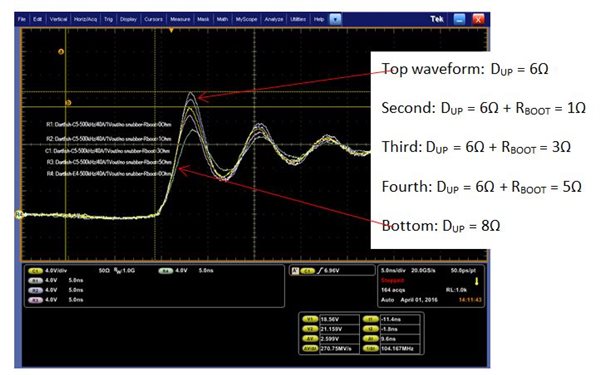 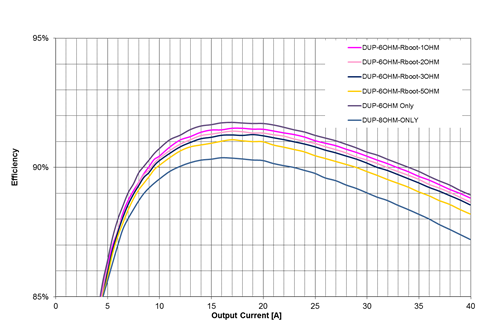 It’s critical to optimize the gate-driver strength with the main power-stage MOSFETs to ensure reliability and obtain the highest converter efficiency. A small variation in gate-driver strength can lead to wide variations in converter performance. Consider the TPS543C20 fixed frequency, non-compensation stackable synchronous buck converter for your next design.