The most efficient way to solve a problem with a converter such as failure to startup, output voltage unstable, etc. is to do some basic debugging. Basic debugging would rule out some obvious problems, like fault assembling or the wrong components and, the debugging data can help support engineers of TI to find the root cause quickly.  In this blog post, we will talk about tips for debugging a boost converter.

Check the problem in another board

If you observe a problem in one boost converter board, your first action should be to confirm the behavior in another board. If only one board behaves abnormally, the problem may be caused by bad soldering or damage to the IC.

The soldering problem can happen when either the IC or its external components are soldered on. There are two kinds of bad soldering. One occurs if the adjacent pins short together; the other occurs if a pin and its pad aren’t soldered well. Measure the resistance between the adjacent pins to rule out the former problem, and measure the internal diode to rule out the latter problem. 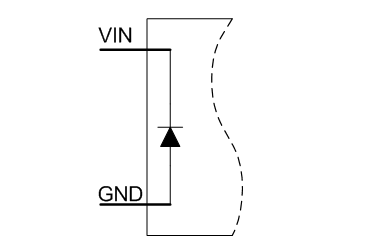 You can check for IC damage by measuring the resistance between the GND pin and any other pins during power off. The circuits (internal or external) connected to the pins may be damaged if the resistance is much lower than the normal ICs. The damage is mostly caused by voltage overstress, which may result from electrostatic discharge (ESD) because of mistaken handling, bad printed circuit board (PCB) layout or a high voltage out of the IC’s specification from an external source.

Check the schematic and components selection

Double-check the schematic again to see if the external components are within the datasheet recommendations. The inductor and the output capacitors are the key components for a boost converter. The inductance and capacitance should be within the value range recommended in the datasheet. You can find the suggestions in the “Recommended Operating Conditions,” “Inductor Selection” and “Capacitor Selection” sections of the datasheet. Figure 2 shows the recommended operating conditions for TI’s TPS61253. The suggested effective capacitance ranges from 3.5µF to 50µF. The suggested inductance is from 0.7µH to 2.9µH.

A ceramic capacitor’s effective capacitance is related to its DC bias voltage. For example, the effective capacitance of a 10µF/0603 capacitor, such as the GRM188R60J106ME47 from Murata, is only 3µF at a 5V bias voltage condition. The current flowing through the inductor should be below the saturation current at any condition. Otherwise, the inductance may decrease below the recommended range, which could cause unexpected problems.

Bad PCB layout causes many problems: IC damage, high output ripple, low output-current capability and more. The damage is mostly caused by a high voltage spike at the SW pin, which overstresses the internal power MOSFET of the IC. (See the user’s guide, “Five Steps to a Good PCB Layout of a Boost Converter,” which describes a method for boost converter PCB layout.) The datasheet and IC user’s guide should also provide a layout pattern example.

The operating waveforms of the converter can be very helpful when seeking the root cause of a boost converter problem. The waveforms of the VIN pin, SW pin, VOUT pin and inductor current are the most important. Figure 3 shows a method for measuring inductor current: insert a wire in series with the inductor and use a current probe to measure the current flowing through the wire.

Measure the four waveforms in the same picture if possible. Figure 4 shows the waveforms of the TPS61258 at light and heavy load conditions. In the waveforms, CH1, CH2, CH3 and CH4 are VOUT, SW, VIN and ICOIL (inductor current), respectively. CH1 is set to DC coupling with a 5V DC offset. So you can easily check both the DC voltage and AC ripple of the TPS61258 output voltage.

At light load conditions, the TPS61258 operates in power-save mode, during which the device switches several cycles and stops for a period of time. At heavy loads, the TPS61258 keeps switching with a 3.5MHz frequency.

One device may operate abnormally if its operating waveform is not similar to the waveforms in Figure 4. You can determine the root cause of the problem from the waveform, such as current-limit trigger, device unstable, VIN out of the specification, etc.

These four tips should help solve most basic problems. However, they may be not enough to solve a complex problem that relates to the whole system power design. In those cases, you may need to contact a TI field application engineer or post the problem in the TI E2E™ Community. It is a good habit to record the experimental data and waveforms while debugging the circuit. The data and waveforms will help a TI engineer find the root cause efficiently.

A simple converter could help avoid many problems from the beginning. TPS61xxx series boost converters are highly integrated, easy-to-use devices. A fixed output-voltage converter such as the TPS61253 requires only three external power components: an input capacitor, inductor and power inductor, as shown in Figure 5. Just follow the datasheet recommendations for component selection and PCB layout. You can implement the required boost converter easily.

The next time you are debugging a boost converter, refer to the tips discussed in this blog for help.

Please share your experiences debugging a boost converter in the comments section below.