Your new design needs to fit twice as much into half the space and cost nothing – sound familiar? You selected the smallest point-of-load regulator and generated the tightest layout you could with the most cost-effective passive components. So far so good. But then you look at the output ripple on your critical rails and it’s not what you expected. What’s going on?

Let’s start by understanding what makes up the output ripple on a buck DC/DC regulator. It is a composite waveform. Traditionally only the three dominant elements shown in Figure 1 have been considered: 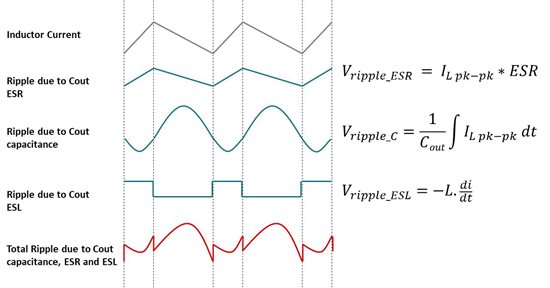 However, what you measure has spikes on the edges and a higher square-wave content that changes polarity when you reverse the inductor shown in Figure 2: 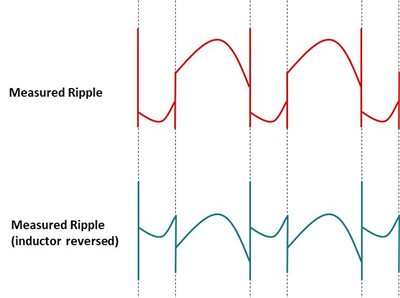 What has caused these undesirable components? And more importantly, what can you do about it?

When you selected your inductor, the self-resonant frequency (SRF) was above your regulator switching frequency, so all was good. Let’s re-look at that – the inductor has an SRF because it has a parallel parasitic capacitance. Applying the fast edge of the switching voltage to the parasitic capacitance generates a large current spike through the capacitor, which in turn generates a large voltage spike across the ESL of the output capacitor (see Equation 1):

To reduce this spike:

This compact layout has output capacitors sitting right next to the inductor. The escaping magnetic field couples to the ESL of the capacitors (and to a lesser extent the output track loops) and generates the square-wave component. When the inductor is reversed, the current in the inductor and the magnetic field is reversed (like swapping the dot in a coupled inductor), so the square-wave component is inverted.
To reduce this effect:

·       Select a shielded inductor to reduce the leakage flux that generates this coupling. If you’re using unshielded or semi-shielded inductors, selecting an inductor that is larger in the x-y dimension but has a lower profile will reduce the airgap height and hence the fringing flux.

·       Reduce the output capacitance ESL as described above.

Now you can look at your output ripple waveform and unpack the different components. By choosing the right external passives and making some careful decisions on layout, you can still achieve a tiny, cost-effective solution and optimize the output ripple for your application.
Additional resources