USB Type-C changed the USB ecosystem in a major way by making both ends of the USB cable interchangeable (not just flippable). This enables USB devices such as laptops or smartphones to have different behavior depending upon what other USB device they are connected to, since the data role and power role can be exchanged independently. The USB Implementers Forum has now released version 1.2 of the USB Type-C specification. There are several key changes over version 1.1 that I’ll summarize in this post, but the biggest difference is a shift in the terminology used to describe this new USB ecosystem. You might say the USB Type-C terminology got a “do-over” with this version.

The new terminology does a better job explaining this new USB world, and is meant to clarify and emphasize that data roles and power roles are orthogonal to each other (except that the initial power role determines the initial data role). In other words, USB is fully embracing this new two-dimensional ecosystem. The following table has some key terms to know.

Figure 1 categorizes many of the possible applications and shows where they fall on this two-dimensional grid. 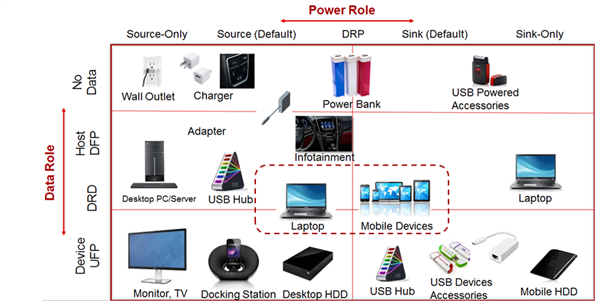 USB Power Delivery enables swapping or changing data roles. For example, there may be a dual-role data (DRD) system that is always a source of power but can be either DFP (host) or UFP (device). Alternatively, there may be a dual-role power (DRP) system that is a DFP (host) while sourcing power, but does not support data while sinking power. Discussing all of the possible applications is a topic for another post, but here I’m just trying to highlight the separation of data roles and power roles.

The initial power role and the initial data role are still associated, as they always have been in Type-C. The device that initializes as the source is either the DFP or not data capable; it may not initialize as a UFP. Likewise, the device that initializes as the sink is either the UFP or not data capable. In order to swap data roles after the initial connection, you must use the USB Power Delivery message DR_Swap.

There are also two features in USB Type-C called default source and default sink. (Version 1.2 adds some clarifications about these features, which were previously referred to as try source and try sink, respectively.) The default source feature is intended for systems that primarily deliver power, but that also sink power at times such as a power bank. The power bank should be providing power unless it is connected to source-only or its battery runs out.  The default sink feature is intended for systems such as smartphones that primarily sink power, but can source power if connected to a sink-only accessory. These two features can be leveraged dynamically, meaning that depending upon the charge level of its battery or some other criterion, the system may change to a sink-only or default source. The following table summarizes the different kinds of roles for USB Type-C devices.

What else is new in USB Type-C version 1.2? Table 1 lists several other changes.

Since a USB Type-C system with a receptacle can connect to a USB legacy Type-A receptacle, all USB Type-C receptacles must also limit the capacitance on VBUS to less than 10µF. Without this requirement, legacy USB Type-A systems may not be able to supply the in-rush current and their internal voltage rails could droop, which could cause a blue screen if the droop is severe enough. Large in-rush currents have also been known to cause connector damage if repeated many times.