Use an ULQ buck regulator for energy-efficient power products 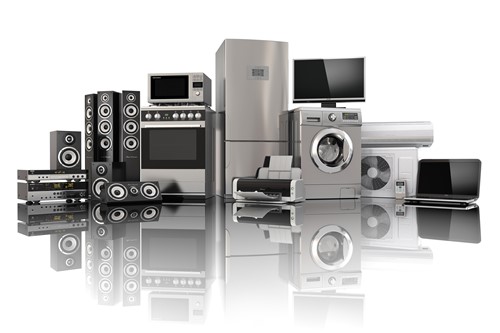 Battery life has played a more and more important role in portable devices, contributing to the overall user experience. Longer battery life has become one of the first priorities for engineers to consider when designing a battery-powered device. Energy Star and similar standards not only require increasing the efficiency of a device during normal operation, but also lower energy consumption while in a standby state.

The power-management integrated circuit (IC) implemented in electrical designs is a bottleneck if you’re trying to further conserve energy. Among the various power-management ICs, buck regulators are the most widely used solution. A single electrical design could have several channels of switching buck regulators. These power rails are in either a shutdown or standby state most of the day. The power loss of these power rails under light loads will dominate the overall energy wasted. Most buck regulators on the market use the energy-saving Eco-mode™ pulse-skipping control scheme to increase the light-load efficiency. The Eco-mode control scheme lowers the switching frequency and keeps the high- and low-side power metal-oxide semiconductor field effect transistors (MOSFETs) off for several cycles just after several switching pulses. With less switching loss, the efficiency will increase significantly compared to a non-Eco-mode control scheme device.

Even with the Eco-mode control scheme, it can be challenging to meet energy-efficiency standards. The issue is when the current consumed while both power MOSFETs are off during the Eco-mode control state. The input current in a nonswitching state is called nonswitching quiescent current (Iq), and indicates the minimum current that keeps the internal logic blocks active. With special silicon design, it’s possible to disable most noncritical blocks under a nonswitching state. The always-on blocks, monitor blocks and detection blocks use little current from the IC’s internal power supply. The Iq will stay at the lowest level to save energy. This feature is called ultra-low quiescent current (ULQ). With ULQ, the light-load efficiency will be further boosted during the Eco-mode control state. 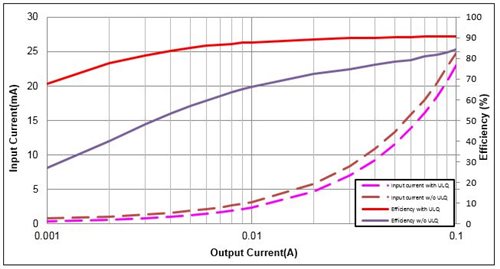 To meet energy-saving demands, TI has introduced the TPS54202 and TPS543302. These ULQ buck regulators are 28V, 2A/3A synchronous step-down converters with two integrated N-channel MOSFETs. They implement a fixed 400kHz switching frequency with peak current-mode control. Their 45µA Iq is only 15% of the Iq of devices without ULQ. Figure 2 is a simple TPS54202/TPS54302 schematic.

During light-load conditions, the TPS54202/TPS54302 will enter the advanced Eco-mode control scheme state. When the inductor peak current is lower than 300/500mA, the device will prevent high-side FET turn-on and skip pulses for several cycles. During pulse skipping and with both the high- and low-side FETs off, the device only consumes the minimum nonswitching quiescent current from the input source (45µA) by disabling most of the internal circuit blocks. Only some always-on blocks and dynamic bias blocks that keep monitor status and fast recovery remain active. All disabled blocks will wake up once the device exits ULQ mode and the internal FETs start switching again. The ULQ feature ensures that the TPS54202/TPS54302 will have better energy-efficiency performance in standby states.

Using a ULQ buck regulator will bring benefits to the design of energy-efficient power products. For battery-powered devices with ULQ functionality, battery life will be greatly lengthened by reduced standby mode energy consumption. For the home appliances that must pass standards like Energy Star, ULQ technology will significantly improve energy efficiency. The TPS54202/TPS54302 with ULQ will contribute to a better world with low energy consumption.