I’ve been hearing a buzz word lately in the Bluetooth® low energy realm: Multi-role.  I had a few suspicions but I wasn’t quite sure what everyone was talking about.  This called for further investigation, and like any curious Millennial, I quickly “Googled it.”  But I realized instead of learning this information second hand, I can go straight to the source.  I sat down with some of TI’s experts to get my questions answered and here’s the latest.

Q: For starters, how do you define the term multi-role?  And when was this feature introduced?

A: Multi-role is defined as a Bluetooth low energy (BLE) device functioning as a central (master) and a peripheral (slave) simultaneously. In the original Bluetooth 4.0 LE specification, a device could only form a connection with a peer device as a master or a slave.  Seeing the need to extend the capability of BLE, a feature known as “Link Layer Topology” was added in the Bluetooth 4.1 specification allowing Bluetooth devices to operate in any combination of roles.

A: It’s important to understand that all new features included in the Bluetooth 4.1 and 4.2 specifications are optional and not required to be supported in order for a device to be Bluetooth certified.  Since the ability to schedule and maintain multiple, simultaneous connections in different roles is quite complex, many Bluetooth 4.1 and 4.2 devices on the market today still only support master or slave operation and don’t include support for multi-role.

Q: That’s interesting.  What type of applications would use multi-role?

A: There is a broad application base and we see new applications all the time, anything from medical to automotive and even home automation.  This functionality opens many doors for cloud connectivity that were not previously possible in closed systems.  Let’s take a look at an example, say a family with a hyper-allergenic child wants to closely monitor the air quality of their home.  They bought multiple sensors to scatter around the rooms with a central wall mount display in the heart of their home showing the air quality results.  This is a working, locally closed solution, but what happens if a window is accidently left open, the parents are upstairs and can’t hear the alert from the central unit?  With multi-role this situation can be avoided.  No longer is sensor data limited to being displayed locally.  Now a smartphone can be connected in the system and data can be collected in the cloud (Figure 1).  Parents can be alerted of air-allergens on their central unit and their smartphones simultaneously increasing the protection of their child.

Q: Now I understand the use cases.  In that system you are describing, which device is utilizing multi-role?

A: The display unit is the multi-role enabled device acting as a hub, operating as a BLE central collecting and displaying data from the air sensors nodes (peripherals) while simultaneously relaying sensor data or alerts to smartphones which are BLE centrals.  All of these Bluetooth connections, shown by the dashed blue lines in Figure 1, are unique and the data transmission occurs when other devices are not scheduled to transmit.

Q: Since I understand the applications, how would you describe the benefits of multi-role?

A: Multi-role adds additional functionality, cost optimization and ease-of-use to traditional Bluetooth systems.  If a device was previously operating as master device in a closed system it can now allow the phone to connect to it as a slave, thus enabling a new connectivity dimension. Without multi-role, additional wireless MCUs would be required to implement the same system architecture. In the example above, the other devices connected with the hub, the air quality sensors and smart phones, are not aware of the other connections and do not need to support a multi-role configuration. By only having to support multi-role on specific nodes, existing networks can be quickly extended without forcing a complete system redesign.

Q: It’s hard to imagine not having this type of additional cloud connectivity, how was this implemented previously?

A: There were ways to do this in the past but they were extremely complicated, higher cost and not power efficient. Essentially it involved using multiple radios on one device or role switching between acting as a central and a peripheral (Figure 2). Consequently, these role-switching systems were not typically deployed and BLE systems remained closed or supported a connection with only a smart device.  Multi-role makes this significantly easier and cost effective, only requiring one radio that transitions roles seamlessly during the unused time between connections when the radio would normally be idle.  In the previous role switching implementation, connections could be dropped, there could be a lag in re-establishment which caused slower communication and consumed more power. Repeatedly seeing “Device Disconnected” notifications on your phone’s display does not make for a pleasant user experience.  Practically speaking, multi-role has added a new dimension to Bluetooth connectivity and brought a theoretical functionality to life. 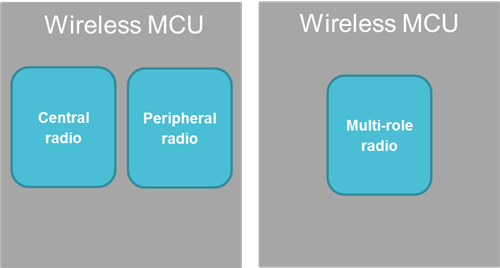 Figure 2: Bluetooth low energy wireless MCU without and with multi-role

Q: Now I can visualize the importance of this feature.  Last question, if I want to implement multi-role into a design today, which device would you recommend and why?

A: The SimpleLink™ Bluetooth low energy CC2640R2F and CC2642R wireless microcontrollers (MCU) based on TI’s experience and longevity as a Bluetooth low energy solution provider is a great place to start.  The CC2640R2F wireless MCU solution has an ARM® Cortex®-M3 application processor, a radio processing core based on a Cortex-M0 and ample memory space to support a multi-role device configuration connecting up to eight other devices in any combination of roles in BT4.2 configuration.  The CC2642R wireless MCU has an ARM® Cortex®-M4F application processor and an increased memory footprint enabling more than eight simultaneous connections.  The capability inside TI’s royalty free Bluetooth low energy software stack, specifically the Link Layer scheduler, drives the SimpleLink family’s finesse in managing multiple connections.  Not to mention the industry-leading range and extremely low power consumption, makes the SimpleLink Bluetooth low energy devices the optimal choice for designing a long range, highly flexible network.

There we have it folks, multi-role demystified.  Are you ready to leverage multi-role to start developing your own innovative system?