Get a grip – sometimes it is easier to get one than to detect it, unless your design has a microcontroller (MCU) with a specialized analog front-end that features capacitive touch sensing.

Grip detection is a real benefit in small handheld device applications, displayed in figure 1, like remote-control units, test and measurement instruments (multimeters, probes), portable battery-operated power tools, video game accessories, virtual reality devices, and beauty and health products (shavers, hair dryers). Many of these systems involve a battery-operated device where low-power consumption is a critical factor. The last thing the end user wants to happen is to forget to turn off the device and find out later that the battery has been depleted. One of the benefits of grip detection is that it can lengthen battery life by automatically powering down all or much of the system when the user isn’t holding it. 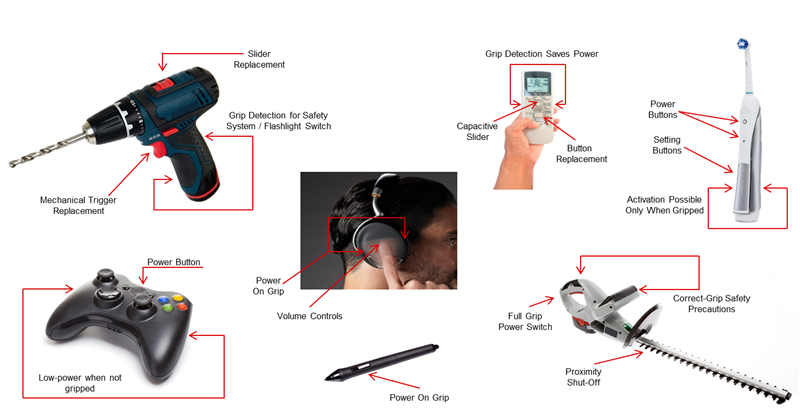 Of course, no one wants a remote-control unit (or any device) that takes awhile to wake up before it’s useful. Microcontroller units (MCUs) like TI’s MSP430FR25x/26x devices with CapTIvate™ touch technology can not only implement a variety of grip-detection schemes, but also have features for proximity sensing, which can wake up the system even before it’s gripped. As part of the CapTIvate touch peripheral, these MSP430™ MCUs feature a finite state machine capable of monitoring as many as four touch sensors. While the system’s central processing unit (CPU) is in deep sleep mode, the sensors controlled by the state machine can detect a finger or hand 30cm away and wake up the CPU so that it can process the upcoming event. Each of the four sensors consumes as little as 0.9μA. This sleep mode also eliminates the need for the CPU to wake up periodically and scan the sensors, as is typical in most touch-based subsystems. The traditional CPU scanning process can drive power consumption up to as much as 20μA per sensor.

In addition to low power consumption, handheld device designers are always concerned with form factor: typically, the smaller the better. Because CapTIvate technology is a high-performance, high-resolution touch front-end, you can deploy smaller devices and smaller sensors to save space and still get the job done. But use cases in power tools and beauty products raise another issue: electromagnetic interference (EMI). EMI noise can trigger false detects for capacitive touch and must be eliminated.  CapTIvate technology has several built-in hardware and software features to improve robustness in the presence of EMI. Systems based on CapTIvate touch technology can pass EMI robustness standards such as International Electrotechnical Commission (IEC) 61000-4-6 and IEC 61000-4-2.

Some devices with grip detection will likely require a significant number of sensors arranged in an array of some sort. MSP430FR25x/26x MCUs with CapTIvate technology have the advantage of supporting both self- and mutual-capacitance sensors in the same system and at the same time. Mutual-capacitance sensors are better suited for applications that require a large number of tightly spaced sensors and exposure to moisture. In power tools, for example, moisture resistance can be important since the end user may be sweating.