The shift toward industry 4.0 automation spurred an exponential increase of robots on factory floors, including industrial robots, collaborative robots and service robots (automated guided vehicles and autonomous mobile robots). Because these robots often work alongside humans, they must have advanced sensing and functional safety capabilities to recognize potential collisions to minimize risk of bodily injury and damage to property.

Industrial robots are used extensively in manufacturing to perform repetitive tasks such as assembly and welding. They can easily handle payloads as heavy as 1,000 kg and operate at speeds upwards of 10 meters per second, enabling increased levels of efficiency and manufacturing productivity compared to humans. Industrial robots typically operate inside cages or fences to protect humans, with sensors that bring the robot to a safe stop when a human enters.

Although safety cages have been the traditional approach to safeguarding humans from industrial robots, this practice does have its drawbacks. First, cages take up a great amount of space and limit a manufacturer’s ability to add more robots on the factory floor. Second, stopping the robot every time a human enters the safety cage leads to increased cycle times, which in the context of an industrial robot is the time that it takes for the robot to complete one operation; cycle time is also a function of the top speed at which the end effector of the robot operates. Optimizing cycle times leads to increased productivity.

An industrial company recently approached TI looking for a virtual safety guard solution as part of their factory upgrade. In an effort to keep their industrial robot cycle times as short as possible without compromising human safety, they wanted to slow their robots down to safe operating speeds in the presence of humans instead of bringing them to a complete stop.

In order to pack more industrial robots into the same space and achieve their overall goal of optimizing cycle times for increased manufacturing productivity, the company wanted to get rid of their old-fashioned safety cages and replace them with a virtual safety guard, a noncontact sensor solution that would create warning and danger zones around each robot arm to detect the presence of humans and ensure worker safety. Figure 1 illustrates the current and requested layouts. 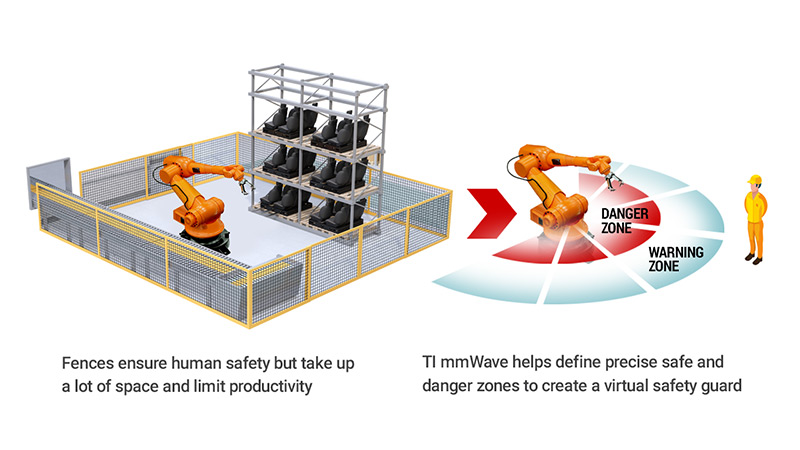 This noncontact sensor solution had to be functionally safe in order to help minimize the risk associated with potential hazardous failures that could cause physical injury, or damage environments or property. TI designed its millimeter-wave (mmWave) radar sensors to help solve these kinds of challenges. From a functional safety standpoint, TI has developed mmWave devices such as the IWR6843 following an extensive hardware and software development process, and with device certification from Technischer Überwachungsverein (TÜV) SÜD. The IWR6843 sensor also comes with several built-in functional safety mechanisms, as shown in Figure 2, that provide the necessary diagnostic coverage required by International Electrotechnical Commission 61508 to meet a random hardware capability as high as Safety Integrity Level (SIL) 2 at the component level. 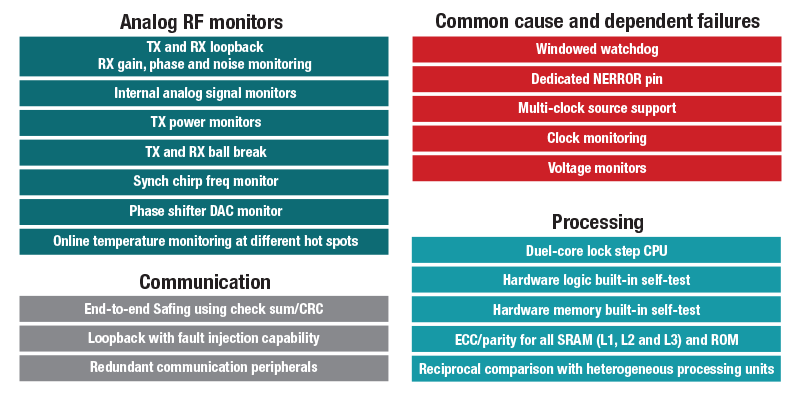 TI mmWave-based safety guards are immune to environmental factors such as debris, smoke and lighting conditions on factory floors. Compared to their functional safety-compliant lidar-based counterparts, they cost less and have a smaller form factor. For these reasons, the customer wanted to use the IWR6843 sensor to solve its design challenge. They were not radar or safety experts, however, and needed additional guidance on radar-based development and the functional safety certification process for their end product. Their lack of radar and functional safety expertise, coupled with an aggressive timeline, led them to look for a third-party turnkey solution based on functional safety-compliant sensors.

After downloading the industrial mmWave radar sensors third-party search tool, the lead engineer on the project found Inxpect’s IWR6843 -based SBV-01 safe radar sensor in the turnkey category. The SBV-01 was a good fit because this sensor supports access detection, restart prevention and a dynamic 3D coverage field. Since Inxpect had already taken the SBV-01 module through the SIL 2 certification process, the end-customer could easily integrate the module out of the box and achieve a SIL-certified system much faster. Safety certification can often take a long time to achieve – one year or more in many cases. Inxpect was able to reduce development efforts, circumvent a long certification time and meet an aggressive schedule by providing a turnkey solution that met both technical requirements and SIL 2 certification.

To find out how TI mmWave can boost your industrial automation application, review the industrial mmWave radar sensors third-party search tool, where you can explore different product categories, sort by relevant parameters and contact third parties directly for help.