Get the most out of integrated analog with MSP432 MCUs

By now you’re probably well aware that our MSP MCUs are much more than digital microcontrollers. A big part of MSP430 and MSP432 MCU portfolios is the integrated analog. Integrated analog helps in applications that need low power to ensure extended battery life. Apart from power efficiency, embedded high-performance analog peripherals within the MCU simplifies your analog front end design and provides many system cost and area benefits, including reducing the bill of materials and board footprint. Of course, MSP MCUs also offer a complete ecosystem with hardware and software tools, reference designs to kick-start your design and reduce development time.

So given all the benefits of integrated analog in MSP MCUs, its no doubt the new MSP432 MCU platform would also provide embedded analog peripherals. But given MSP432 MCUs are designed for high performance and low-power applications – we kicked up the performance while keeping the power down, especially for the analog-to-digital converter (ADC).

The integrated analog capabilities described below on the MSP432 MCU platform provide for single-chip sensor transmitter solutions used extensively in industrial factory, industrial process and building automation. In this case the MSP432 MCU can sense the analog signal from a sensor solution, provide for system management support and also carry out the communication with the gate-way all in a single chip. These solutions are also typically based on a two-wire system solution where communication and power to the system occur over the two wires. For these wired solutions, the total current budget for the sensor and transmitter is limited to below 3.5mA. The low active current of the MSP432 MCU (95uA/MHz) enables a larger current budget for the implemented sensor or for multiple sensors in a single end-node.

The additional performance provided by MSP432 MCUs also enable a multi-master configuration in a single chip. Typically referred to as a uPLC, MSP432 MCUs have sufficient resources to support multiple end-node solutions in a single chip. On top of this, MSP432 MCUs can manage and run digital protocols, such as HART and IO Link, superimposed on the analog wired communication.

You can test out the integrated analog of MSP432 MCUs for your own application, using the MSP432 LaunchPad and analog peripheral example code in MSPWare.

The MSP432 MCU platform features a new 1 MSPS 14-bit ADC that provides high performance, high resolution while maintaining low power consumption. In terms of accuracy, the ADC14 achieves extremely low INL and DNL errors while maintaining extremely high effective number of bit (ENOB) at more than 13-bits. In addition to being high performance, this module obtains extremely low power consumption, with single ended mode it consumes only 210uA at 1.8V and 1Msps while the differential mode consumes only 260uA at 1.8V and 1Msps. 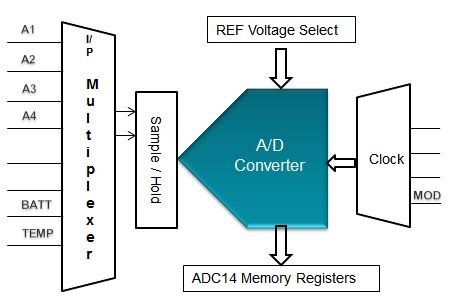 The ADC14 is the next generation of the ADC modules in the MSP Family. Comparing to the ADC12, which is a 12-bit resolution ADC popular on several MSP430 MCU devices, there are lots of new features introduced on the ADC14.

First off let’s take a look at the window comparator. The ADC14 introduces a 14 bit window comparator - extremely useful for applications that need to monitor an analog signal to check when it falls within or outside a certain range. Traditionally you would have to constantly monitor the signal, perform the sample and then compare in software to see if it falls within the range or outside the range. Using the window comparator, you could configure the input threshold levels and the ADC14 will continuously convert the result and internally compare the sample result against the threshold. It will trigger the interrupts depending on whether it falls below, between or higher than the window. So this is very useful to keep the device low power, since no CPU activity is required until the analog signal falls within the range of interest. 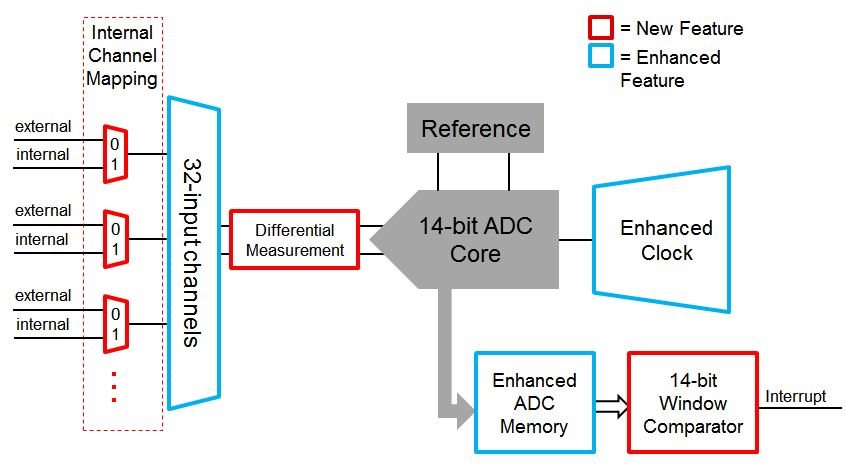 Another new feature to the ADC14 is Internal Channel Mapping. So traditionally on ADC12 modules there are some dedicated external as well internal channels. Some of the internal channels are temperature sensors as well as ADC monitor channels. So sometimes for certain applications that require absolutely as many input channels as possible, it can be inconvenient that some channels are fixed. With this in mind ADC14 introduces the channel mapping capability that gives you the flexibility whether or not to use an internal or external channel.

There are some other enhancements that have been introduced to ADC14 for example, now there are up to 32 input channels (a big increase compared to some ADC12 implementations with 16 channels). The clock is also enhanced to set more sources. Since the ADC14 operates at up to 1Msps, it requires a much higher clock. The higher clock source for ADC14 is MODOSC which can run up to 25MHz . However, when ADC14 runs at a lower sample rate such as 200Ksps it doesn’t require a higher clock source, so a slower clock source such as SYSOSC running at 5MHz can be used. This allows the ADC14 to consume less power and be more efficient.

The next analog module that MSP432 MCU introduces is the Comparator E. This is an ultra-low power comparator that has been introduced in previous MSP Families. The comparator E is created for ultra-low-power consumption. It could be interrupt driven for low power operating modes. It has up to 15 external input channels and it also used the reference modules for the reference voltage. The output of the comparator E is also internally connected to the Timer A capture input. This way you can create an event capture or use it for capacitive touch implementation. There are two instances of Comparator E provided in the MSP432P4xx MCU family

Explore the analog peripherals on MSP432 MCUs by running the example code in MSPWare on your MSP432 LaunchPad today!