Vehicular network interfaces (VNIs) are dongles that plug into a vehicle’s onboard diagnostics (OBD) port to facilitate communication with electronic subsystems such as the engine control unit. Automotive manufacturers and fleet operators use VNIs for developing and testing vehicle subsystems and for data logging. 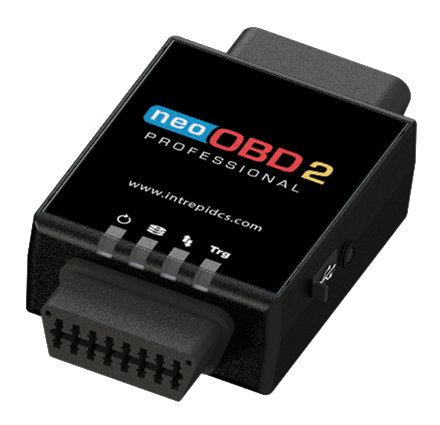 Why Intrepid chose the CC3220SF and Amazon FreeRTOS

Intrepid had an existing OBD product and wanted to add Wi-Fi and IoT connectivity without an extensive redesign. TI’s SimpleLink™ CC3220SF microcontroller (MCU) includes a dedicated network processor with a built-in Transmission Control Protocol/Internet Protocol and Wi-Fi stack, making it easy to add these capabilities to a new design (see Figure 2). Intrepid chose the CC3220SF module, since it was already Wi-Fi and Federal Communications Commission-certified.

The CC3220SF’s end-to-end security enablers and low-power performance addressed two key requirements in the neoOBD2 Pro. First, the product allows remote access to and control of essential vehicular subsystems and therefore should be able to prevent attacks from hackers. Second, since the neoOBD2 Pro typically operates for weeks at a time and draws its power from the vehicle’s battery, low-power consumption is critical.

To differentiate from existing connected VNI dongles, which return a fixed limited data set, the neoOBD2 Pro offers an SDK to create custom applications that can return any possible data or perform any possible control operation. Intrepid was able to develop its SDK much more quickly by reusing the existing open-source example applications and documentation in the CC3220SF SimpleLink SDK and Amazon FreeRTOS SDK. These SDKs offered comprehensive collateral and Intrepid found that the SimpleLink MCU platform and AWS had strong reputations with customers.

Intrepid’s SDK customers can use existing CC3220SF or Amazon FreeRTOS examples to quickly build a sample network application or connect to the cloud without needing to be experts in Message Queuing Telemetry Transport or Wi-Fi. To support the development of custom VNI applications, the SDK includes the Intrepid Security Module – a library that executes on the CC3220SF MCU and enables developers to access VNI functions through an underlying Serial Peripheral Interface (SPI) connection.