My first exposure to energy harvesting was probably in the form of a portable calculator back in 1980, and while the calculator is ancient the technology and concept is still used daily— some 35 years later.  In today’s world, we see energy harvesting in sensor nodes, wind turbines and in outdoor charging applications, to name a few. While the conversation around the technology has very much evolved when it comes to energy harvesting, developers are still facing the same challenges as their counterparts did 10, 20 or even 30 years ago.

To generate the required amount of energy without compromise generally requires a large physical footprint of solar panels, a vast array of thermal energy harvesters or a diverse range of vibration based devices – this is of course system dependent. Hence, in many cases, the cost of the system outweighs the benefits brought by replacing a more conventional power source.  There are some exceptions where these constraints are overridden by other factors. For example, in remote physical locations where line power is not available wind or solar energy harvesting may provide a viable alternative to a battery powered system, albeit, typically at a higher initial cost. 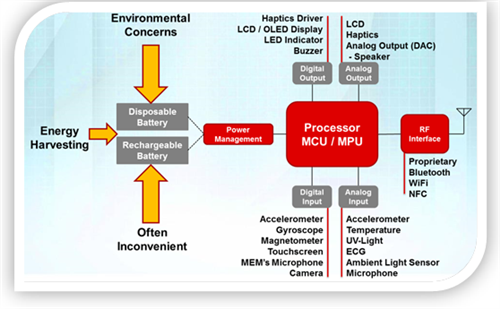 The system comprises of inputs and outputs, including sensors, buttons, LED’s, displays, sounders and an ever increasing trend for wireless connectivity, have you heard of the Internet of Things (IoT)?  These IoT edge nodes may communicate using Wi-Fi®, Bluetooth®, NFC / RFID or other proprietary interfaces.  These wireless connections require from as little as a few uA’s upto 10’s or 100’s of mA’s for 10’s of milliseconds to power the associated RF IC’s and subsystems. 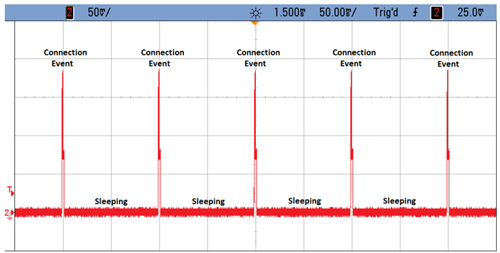 In many applications, designers would like to store sensor or other data in a non-volatile memory so that in the event of a power loss the gathered data is recoverable.  Common memory technologies such as EEPROM or FLASH, whilst readily available, aren’t always ideal for operation in these energy restricted situations.

Fortunately, technology is progressing in ways that help to make energy harvesting systems viable. One such technology integration is TI’s range of Ferroelectric Random Access Memory or FRAM microcontrollers (MCU).  FRAM technology brings together many of the benefits of SRAM memory, but with the non-volatility of FLASH memory.  A key benefit is the ultra-low-power non-volatile FRAM write, unlike FLASH these writes require no pre-erase cycle, saving both time and energy.  Another benefit is the native low voltage write of the FRAM cell, conventional flash or EEPROM technologies require an integrated charge pump to complete the pre-erase cycle, often requiring 5 -10 mA’s for several 100 mS’s, in applications where frequent non-volatile writes are needed this additional energy draw can put a substantial drain on a battery or harvested energy source.

The cost of purchasing disposable batteries is low however the effect of them can be high!  Globally each year, billions of new batteries are purchased and only a small percentage is recycled, creating a large volume of landfill waste. The other drawback with disposable batteries is that either the battery or, in some cases, the entire system will need to be replaced at some point in time potentially creating a challenge of accessibility. What happens if the battery is installed in a system that is deployed at the bottom of the ocean or on the top of a mountain? Battery replacement costs can become significant. Rechargeable batteries can help with reducing the amount of replacement batteries, but on their own they don’t necessarily help when accessibility is a challenge.  Rechargeable batteries do become an asset when we can use energy harvesting to keep them charged.

There are a number generally accepted energy sources available, solar, thermal, motion (vibration or ‘other ’kinetic effects’) and RF.  Other sources are also being explored, like the potential for harvesting energy from an electro-chemical reaction with human blood or within plants and trees.

Under ideal circumstances these energy sources would be continuous, but in reality that is often not the case. With a solar harvester, the clouds may roll in or if in an indoor facility the lights might be turned off. Vibration based harvesters typically operate around a resonant frequency limiting their range of operation, and thermal harvesters may lose efficiency or stop operating altogether if a suitable temperature differential is not maintained.  What this boils down to is that we cannot rely on the energy source to remain constant 24 hours a day and seven days a week, so we need to build in redundancy. In some cases this may be a second harvested source or a rechargeable battery/supercap.  Even my solar powered calculator includes CR2025 battery to back-up the solar when it’s dim in the office.

Handling a loss of power becomes a major consideration for an energy harvesting node designer.  Modern microcontrollers run through a boot sequence on power up, often taking several milliseconds and consuming valuable energy.  If power is lost most microcontrollers need to restart and run through this boot code each time power is cycled.

FRAM memory itself is an enabler of a highly innovative software utility called Compute Through Power Loss (CTPL).  I like to think of CTPL as a kind-of non-volatile interrupt service routine, where when a power loss is detected (usually by using either a comparator or ADC input) the vital parameters and states of the microcontroller are saved to non-volatile memory (NVM).  In the event of a power loss the benefits of FRAM make the difference between picking up where you left off or starting your program execution from scratch.

A simple demonstration can be made using the low cost MSP430FR6989 MCU Launchpad™ development kit which features a 128 KB FRAM MSP430™ microcontroller.