This blog was updated on 11/19/15 by Svein Vetti to include information about the Sub-1 GHz solution in this family.

The new SimpleLink™ CC26xx/CC13xx ultra-low power platform for Bluetooth® low energy, 6LoWPAN, ZigBee®, Sub-1 GHz and ZigBee RF4CE™ is built and designed with low power in mind. In the following, we have looked at all aspects important to making sure the energy footprint of our solution is as small as possible enabling longer battery lifetimes, smaller batteries or even energy harvesting for battery-less applications.

Contrary to popular belief, that radio transceiver itself is not always the main contributor to the overall power consumption of a wireless microcontroller (MCU). As various technologies progress, there is more and more need for computing power even at relatively small sensors and the wireless protocol stacks come with more overhead as the standards evolve.

In the SimpleLink CC26xx/CC13xx family, there are two very energy efficient MCUs available for the application.

The ARM Cortex-M3 is the main system CPU inside the CC26xx/CC13xx device. One way of measuring the performance of MCUs is by using benchmark tools. One of the more popular benchmarks is CoreMark from the Embedded Microprocessor Benchmark Consortium (EEMBC). CoreMark is a simple, yet sophisticated, benchmark that is designed to test the efficiency of a processor core used in embedded devices. It is not system dependent, therefore it functions the same regardless of the platform (e.g big/little endian, high-end or low-end processors etc.). This benchmark also demonstrates the energy efficiency of the MCU core.

The scores in Table 1 allow for very low average power consumption during active use. Running the ARM Cortex-M3 at maximum speed (48MHz) the CPU operation consumes less than 3 mA and outperforms any wireless MCU running at less efficient cores or at lower CPU clocks. The CC26xx Coremark power efficiency (CoreMark / mA) is the best compared to any competitor with a comparable MCU, making it the most energy efficient microcontroller available today.

The unique ultra-low power sensor controller is a 16-bit CPU coupled with peripherals like analog to digital converter (ADC), analog comparators, SPI/I2C and capacitive touch. It is designed to run autonomously when the rest of the system is in standby.  The Sensor Controller allows interface with external analog or digital sensors in a very low power manner.

Figure 1: The ultra-low power sensor controller engine can run autonomously while the rest of the system is in standby

Waking up the entire system to perform minor tasks is very often not energy-efficient as it introduces a lot of overhead. In many use cases there are tasks that need to run at certain intervals that are at a higher duty-cycle than the actual RF or main activity.

One example could be a heart-rate monitor that needs to run the ADC 10 times per second to capture the heart rate accurately. Waking the entire system up to perform a wireless transmission 10 times per second will in this case be very energy inefficient. With the SimpleLink ultra-low power platform, one can let the Sensor Controller perform all the ADC measurements and wake up the ARM Cortex-M3 every 10th ADC sample for optional further processing and group RF transmission of this data. 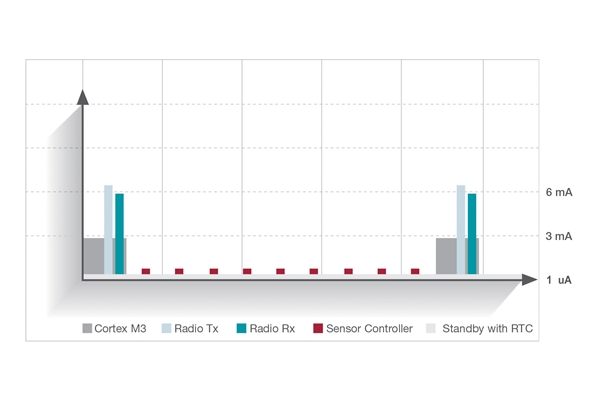 In this example the sensor controller can do 10 ADC reads per second at less than 3 uA average consumption. Performing the same task using the ARM Cortex-M3 will require 10x the power consumption.

Table 2: Energy efficiency of the sensor controller while running at the main clock.

The sensor controller can run directly off a pre-scaled 24 MHz clock, making it capable of collecting data and performing simple processing of the data.

CC26xx is optimized for 2.4 GHz frequency operations and are covering standards like Bluetooth low energy and mesh solutions like ZigBee and 6LoWPAN. Traditionally, the peak drain caused by high transmit and receive currents of wireless solutions puts constraints on the batteries that could be used or significantly reduced the battery lifetime. With the very low peak currents of the CC26xx at around 6mA (RX and TX at 0 dBm output), this no longer poses any limitations on the traditional CR2032 batteries and can even allow for smaller batteries to be used. From an average power consumption perspective, the radio is no longer the main contributor and is of less concern and there is no longer a need to back down on the output power to reduce the peak consumption.
The SimpleLink CC1310 wireless MCU is optimized for Sub-1 GHz frequency operation, which will typically offer better range than 2.4 GHz for various reasons. First, Sub-1 GHz technology offers better penetration through walls, but it is also designed to transmit higher output power than most 2.4 GHz solutions, thus giving a higher link budget and longer range. From a CR2032 battery, the CC1310 wireless MCU is only drawing 6.6 mA in RX and 15.5mA in transmit (+10dBm). With a buffer capacitor, it would also be possible to transmit even higher output power (max is +14dBm). Using good antennas, the CC1310 device can offer up to 20 km using a coin cell battery only. Both CC1310 and CC26xx solutions have a built-in, very efficient DC/DC converter such that higher battery voltage (for example a 3.6V lithium battery) will reduce the current drawn from the battery.

In any battery operated application, the RF (receive/transmit) duty-cycle and its parameters decide the battery lifetime. Between transmissions, it is important to keep the standby currents as low as possible so that there is enough juice in the battery for the active use. The CC26xx uses an ultra-low leakage SRAM that can be fully retained (20 KB) and in addition have the real time clock (RTC) running, and registers and CPU state retained while in standby consuming as little as 0,75uA/1uA  (CC13xx/CC26xx). In shutdown, the CC26xx/CC13xx can wake up on external IO events while drawing as little as 150nA.
The shelf lives for CR2032s are increasing and some vendors now state up to 10 years of battery life. The average system current drawn from a 220 mAh CR2032 has to be below 2.5uA to reach 10 years lifetime [2]. If the base current of a system is above this, one cannot reach the maximum potential of the battery, no matter how low active duty-cycle one implements.

Battery life time is mostly about the average power consumption. This will be very use-case dependent, but there is a benchmark now available from EEMBC called ULPBench™ that standardizes on datasheet parameters and provides a methodology to reliably and equitably measure MCU energy efficiency. ULPBench uses a common set of workloads that are portable across 8-, 16- and 32-bit microcontrollers, enables the use of MCU low-power modes while focusing on real-world applications utilizing integrated hardware functions. In the end it analyzes the effects of active and low-power conditions [3].
Another common way of looking at average current is to look at a specific use-case for a given technology. For Bluetooth low energy, one way is to point out the average while keeping a connection between two devices at a given interval.

All of what has been discussed comes into play when looking at the power profile of a wireless event. Figure 4 shows a connection event for Bluetooth low energy with wake-up, pre-processing of the software stack, radio events (both receive and transmit) and a post-processing / going back to sleep period.

For additional information about Sub-1 GHz in the Internet of Things read this new white paper: Diversifying the IoT with Sub-1 GHz technology

To get started developing with this SimpleLink ultra-low power platform, order one of our new LaunchPad™ development kits