As more and more devices connect to the Internet of Things (IoT), higher security standards have become a necessity. The threat from using unsecure IoT devices poses a risk to infrastructures as big as connected cities all the way down to connected fish tanks.

Governments are taking notice that IoT devices need to be secure before integrating these devices into their infrastructures. In 2017, the U.S. Senate introduced legislation requiring that devices that connect to the internet have no security defects listed by the National Institute of Standards and Technology (NIST). In 2018, California passed a law requiring manufacturers to implement “reasonable” security against unauthorized access. This law goes into effect Jan. 1, 2020.

Security remains a priority for businesses looking to implement IoT products into their infrastructures. According to a 2018 survey by Bain and Co., security is the top barrier to adopting enterprise IoT solutions, and has been the top concern since 2016. In the same survey, enterprise customers said they would actually pay more if their security concerns were addressed. This is especially true for markets that handle highly sensitive data like health records.

So it’s clear that manufacturers need to implement secure products. Unfortunately, the term “secure” is a bit unclear. Several third parties claim to have a secure solution, but nothing on the market provides a whole system approach.

This ambiguity indicates a clear need for manufacturers to use silicon that implements industry standards for secure algorithms; however, since any silicon company can claim to have implemented these standards, it then becomes even more important to have third-party verification.

TI has decided to follow an industry standard for security, a standard that outlines secure algorithms that requires validation by approved third-party test labs and is reviewed for accuracy by an agency dedicated to security. In the third generation of SimpleLink™ Wi-Fi devices, we validated our security through Federal Information Processing Standard (FIPS) Publication 140-2, a U.S. government computer security standard.

FIPS 140-2 is a standard for certifying the security of electronic hardware.

Implementing security can be a long, expensive and rigorous process; validating for FIPS is no exception. The first step involves creating and implementing an approved security algorithm. Any manufacturer knows that whether it is implementing algorithms like the Advanced Encryption Standard or Secure Hash Algorithm, development requires planning from the physical to application layer. As you can see in Figure 3, TI’s SimpleLink MCUs have been developed to cover security from the physical to the application layers in both of our separate execution environments. 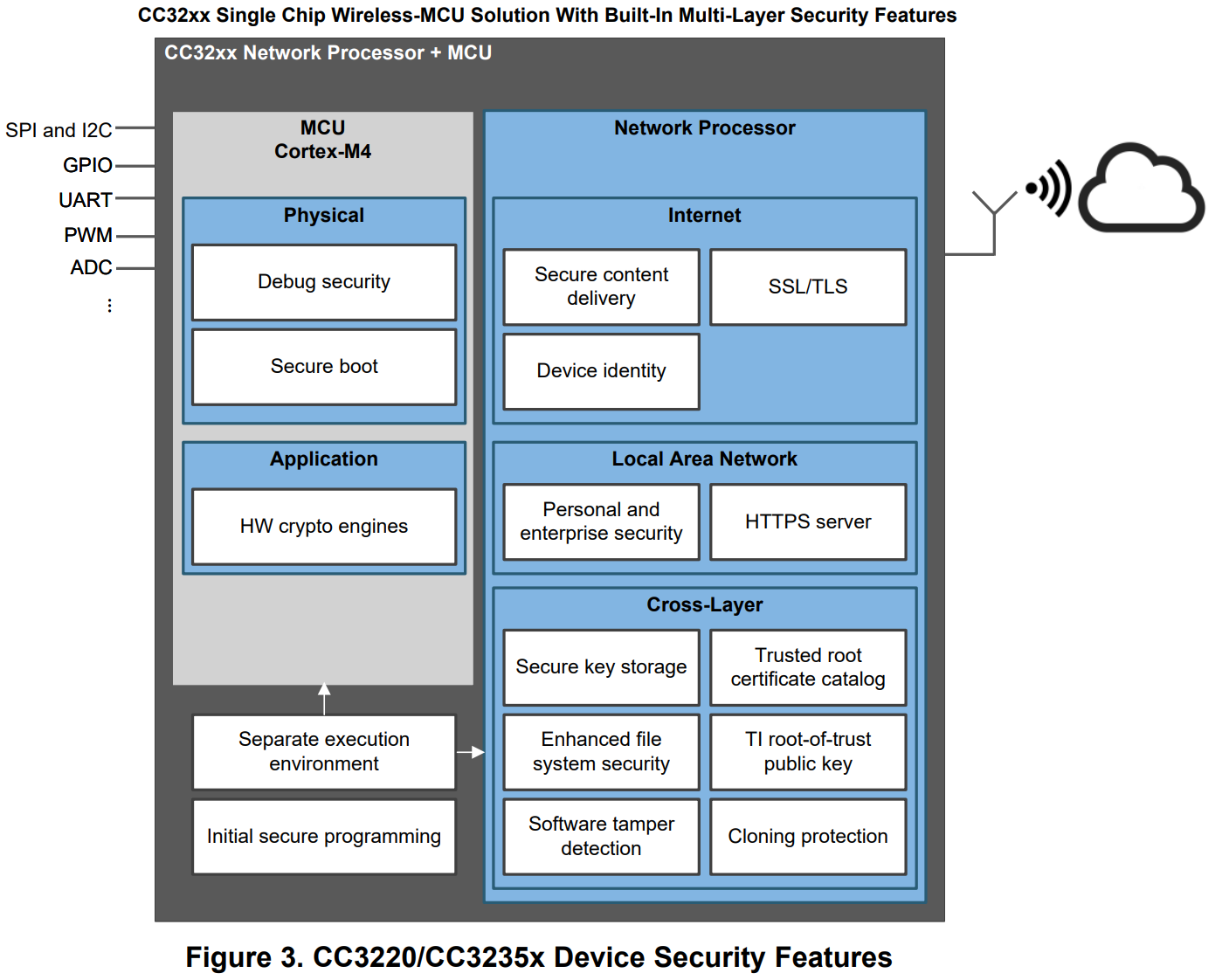 The next step involves selecting a NIST-approved third-party testing lab to verify the algorithms. This process can take several months to even over a year. TI had to go back and forth constantly with the test lab, implementing fixes and verifying our design until we got it right. Each algorithm requires its own testing and verification. This was true when we validated our WiLink™ WL1837MOD module for FIPS, and it continued to be true for SimpleLink devices, where we validated 12 algorithms for FIPS.

All test reports must be submitted to NIST for review and approval. While the third-party labs are reputable and approved, NIST takes it a step further to verify the test reports themselves before giving the final validation. This entire process ensures three levels of verification for SimpleLink Wi-Fi devices: manufacturer, third-party lab and government agency.

What does FIPS 140-2 validation mean?

In TI SimpleLink Wi-Fi devices, we’ve always claimed to have comprehensive end-to-end security. We’ve taken it a step further to validate that security with FIPS. When you implement SimpleLink Wi-Fi devices in your applications, you’ll be implementing far more than just “reasonable” security. You’ll be implementing security that the U.S. government has validated – security that organizations swear by to ensure their safety and privacy.

If your end product uses our third-generation devices, you can use the phrase “FIPS Inside” to show your customers that you only use components with the highest standard of security. You can even take it a step further to FIPS-validate your own devices. Our validation can be reused, and you will save time and money.

If you’d like to learn more about FIPS, take a look at our overview of FIPS: What is FIPS?.

ti.com/simplelink, and learn more about our SimpleLink platform and the next generation of SimpleLink Wi-Fi devices.