What is Compute Through Power Loss?

With the Launch of new MSP430 FRAM MCUs and the latest MSP430 FRAM LaunchPad, you may have missed our recently launched MSP-FRAM-UTILITIES page. The truth is, this is likely the most exciting release in terms of both innovation and usability since our power-profiling EnergyTrace Technology that released nearly one year ago. Given the mix of MSP430FRx FRAM microcontrollers released this past year, we thought it would be fitting to start a library that could leverage some of the unique memory advantages offered across this family of microcontrollers:

Compute Through Power Loss (CTPL) is a software utility that enables a system to save the CPU and several peripheral states in non-volatile memory before entering a low-power mode or losing power. This library features a number of APIs to monitor for events such as power-failure and to react to those events in an intelligent way. This is only possible on FRAM microcontrollers which are capable of writing at 8MHz with zero wait-states. This ultra-fast non-volatile write speed combines with 10e15 endurance to enable exciting capabilities. Since our memory protection unit is used to ensure safe operation, this is currently available exclusively on MSP430FR5x/6x microcontrollers. Let's look at the new possibilities: 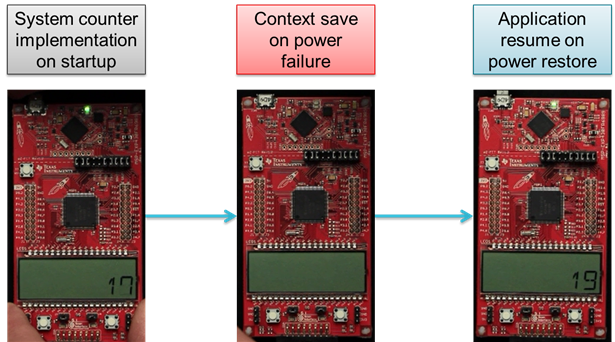 This new software library can be leveraged across applications! Read the whitepaper and explore the TI Design (TIDM-FRAM-CTPL) to learn more and get started with this utility API and the MSP-EXP430FR6989 LaunchPad!