[FAQ] TLV320AIC CODECS and ADCs: How to restart / revive a USB Audio EVM

Greetings. I'm working with the listed EVM. It worked briefly with headphones and a USB connection - I could hear all audio from my PC through my headphones via the dev board. I disconnected the dev board to relocate my testing setup to the lab, and upon reconnection, audio playback was no longer working. The USB-MODEVM is still recognized by my PC as an audio source (no driver errors listed in windows device manager), I can still connect to the TLV320 daughterboard using Codec control via the USB-MODEVM (I can hear changes in daughterboard-produced noise when I change things in Codec control), but I cannot get PC audio playback through the toolchain. It seems like something is broken/misconfigured between the USB-MODEVM and the daughterboard, but I can't figure out what. Any ideas?

Note that the DIP switches on the USB-MODEVM are set to positions 2 and 8 high, the rest low.

One other interesting observation - I can no longer hear the "Beep" in the headphones. This might suggest an error in my setup, but its not obvious what that is. See below for the top level view of my configuration - any suggestions welcome. 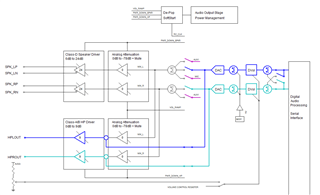