ADS54J60EVM: selection of wideband pre-amplifier for use in LiDAR application

After submitting a thread in Texas E2E forum regarding the way the TI ADS54J60EVM works in conjunction with the balun/transformer ADT1-1WT, we came to the conclusion that this Texas ADC/FMC board will not perform as expect in our use case scenario.

More specifically, our signal comes from a photoreceiver and then it is being fed via an SMA coaxial cable to the Texas ADS54J60EVM FMC board. The frequency content is in the range of 40MHz to 120MHz. 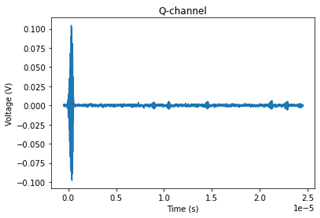 As you see, the first "peak" is almost 200mV p-p and we also have some smaller peaks that are in the range of 20mV-25mV p-p. Ideally, we would want to preserve all the frequency content while exploiting the ADC's full-scale range (1.9V p-p).

I have the following questions:

1) Will the frequency content of the "smaller" peaks be preserved even if their power/amplitude is so much lower than the "bigger" ones?

2) What would be the a good Texas Instruments wideband amplifier that will introduce the least amount of noise and at the same time exploit the ADC's full-scale range (1.9V p-p)?

3) If we amplify the signal so much that the peak-to-peak input to the SMA connectors of the ADS54JEVM swings to more than 5V p-p (i.e., using an amplifier with high gain to amplify the "smaller peaks") will the ADC translate this as the maxed out values (8000 and 7FFF)?

4) What should the impedance characteristics be considering that the ADT1-1WT balun/transformer has 75 Ohm impedance in its inputs? Given that most commercial amplifiers work with 50 Ohm impedance how that will affect the final gain?

In summary: we want to use an amplifier before the TI ADS54J60EVM's SMA inputs in order to preserve all the frequency content in the range of 40MHz-120MHz.