For my project I want to use two FSR to sense the user's feet. A Force Sensitive Resistor has a rest resistance of a couple of Megohms, it decreases quickly to a couple hundred ohms when a force is applied to it. I noticed that TI does not have any reference design to measure FSR's resistance change so I tried to build something similar to this one but using a positive voltage reference (LM4041 polarized at 4.4mA from a regulated 3.3V) like so: 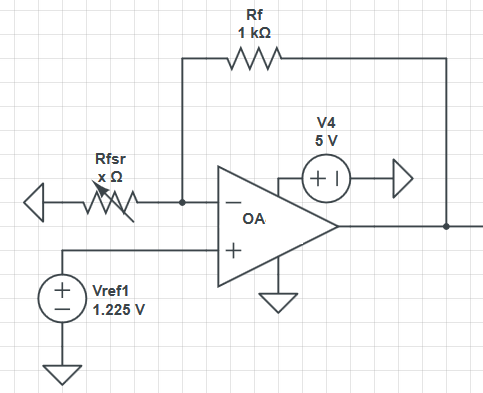 Unfortunately this is not working. By replacing the FSR by a fixed 1k resistor, Vout should be 2*1.225V, but it is around 0.7V. The reference voltage is stable (for any value of Rfsr, V+ is 1.225V) but the feedback doesn't seem to work (V- is equal to Vout).

I have a currently disconnected second stage that removes the 1.225V reference after this one to be read by an ADC.

What am I dong wrong?