I would like to build a demo from the two evaluation boards.

I have built and installed everything according to SNLU224C, chapter "2.4 Demo Instructions for DS90UB95x-Q1EVM". I can see the two devices in the ALP (version 1.57.001). At the beginning ALP also shows me that a serializer of type 953 is connected. However, after a few seconds the type changes to DS90UB913 and occasionally toggles between DS90UB953 and 913, but mostly 913.

On the deserializer board the LEDs for LOCK and PASS light up, but only very weak compared to other LEDs.

When I start the script 953to954_patgen_YUV_1920x1080p-4Lanes-Working.py the serializer is recognized and it runs through. But after that in the deserializer "Current RX Port Status" window at Horizontal or Vertical nothing is shown. 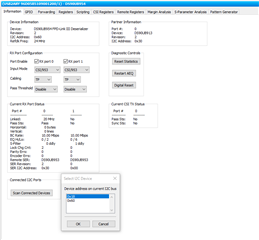