This MCU has an errata USCI42 that has no official workaround provided by TI.

Here is the errata

I would like to propose an unofficial workaround for the half-duplex case. Please let me know if it has a possibility of working.

First of all, looking at the block diagram of the USCI module shows that, for transmission, it has two main components: the transmit buffer and the output shift register. 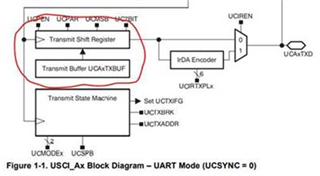 My proposed alternative way is as follows:

First, find how long it takes to transmit a byte, say, 2ms. If we are transmitting 10bytes, that should takes 20ms. Under optimal conditions, after the 10th byte has been sent, UCTXCPTIFG would be sent and the controller can change to RX mode and get ready to receive. An alternative is to set a timer after the 10th bytes has been sent for say, 1ms or however long we feel is long enough to safely feel that the final byte has been sent, and then have controller change to rx mode. Of course, the alternative way is not as exact as the official way, hence why it is less optimal.