We would like to ask your help regarding the customer's inquiry below.

The stepper motor control driver used in our product is DRV8825. It was found there was step loss in the devices produced a few months ago. Now it is found the behavior of the DRV8825 is not consistent. We changed the DRV8825, and it was found the replaced DRV8825 worked correctly, and no step loss was found.

Two diagrams are shown below. The test is forward/backward operation of fixed steps movement, 8 micro-stepping, and the run time is more than one day. The snapshot is the Aout and Bout's current shape at different time in a run, which is measured by oscilloscope. The control software is same.
- The diagram with four snapshots shows current status of the product with step loss. It shows the shape of the current phase differed a lot at different time point.

- The diagram with 2 snapshots shows current status of the product with no step loss found. It shows the shape of the current phase is similar. 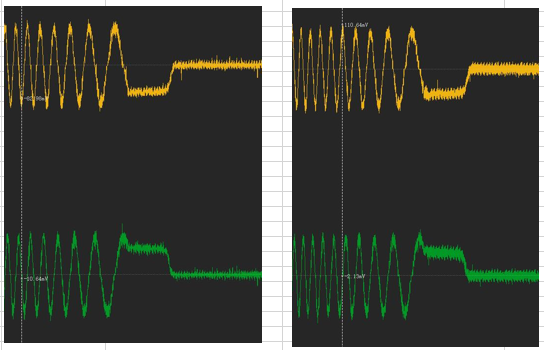 Theoretical, the internal indexer changed based on the step input signal and micro-stepping mode setting. If the configuration of the DRV8825 is same, and the move is the same from the fixed start position, the current phase at the end of one move should be same, and the diagram with 2 current snapshots shows that. If that is the case, what might cause the inconsistent behavior shown on the diagram with 4 snapshots.

I hope to get some supports on the problem analysis. Thank you in advance.