The DRV262x and DRV260x devices has a TI haptic broadcast mode where it will make the device respond to the slave address 0x58 (7-bit) or 1011000 in binary. This mode is useful in the event that multiple haptic drivers implementing the TI haptic broadcast mode as installed in the system. In such a scenario, writing the GO bit to the 0x58 slave address will cause all haptic drivers to trigger the process at the same time.

The block design below shows the TCA9548A acting as a switch for SDA and SCL communication as well as in the use case for the DRV260x the TCA9554 being used as a GPIO expander to switch on/off the EN pins of each device individually, using GPIO on the DRV262x series would cause issues as it has NRST instead of an EN pin and so would reset all registers if switched off and on. 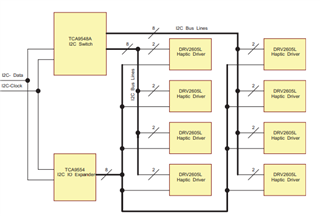