LM34936-Q1: Circuit can not operate with full load at boost mode or Buck-boost mode ; Schematic review.

I have already made PCB design and the borad is under debug. In debug process , i found one problem,

when input voltage is 14.5V , the circuit can drive 15A load normally. (buck mode)

if the input voltage is 9 - 13V, the circuit ONLY can raise load to about 4A.

it seems like that the converter operates abnormally with heavy load when it is in boost or buck-boost region.

this is my Schematic diagram , I would like a kind engineer help me review it and find the design fault. 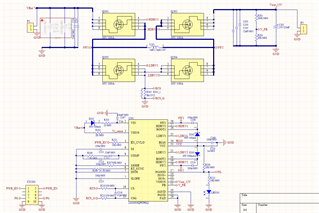 I would also like to listen to more advises for improvement.

for the problem above , i have 2 questions: