May I ask for help? Kindly see our customer concern as stated below:

"We are developing a Battery Management System (BMS) for a 6s Li-ion battery pack intended to be used for light and medium weight aerial vehicles. For this we will be utilizing BQ76942 as the monitor. The following are some of the features we have considered while designing the BMS-
• Capability to monitor individual series cell voltages in real-time.
• External cell balancing nFET network for 120mA current.
• Internal REG of BQ76942 won’t be utilized to mitigate heating within IC. Voltage regulation will be done by separate buck converters.
• Parallel FET network to be separately implemented for charging(10-20A) and discharging(200A). These FETs will be externally controlled by MCU using CFETOFF and DFETOFF pins of BQ76942.
• Two 10K thermistors externally interfaces with BQ76942 for temperature logging of battery pack and FETs (pins TS1 and TS3).
• Current sensing will not be used.

Regarding the firmware part of BQ76942, we are intending to communicate and program using I2C. We have referred to the technical document provided and understood that read and write operations can be performed using a set of 7-bit commands and 16-bit subcommands. From the document its also clear that EV2400 (MSP430 MCU) and LaunchPad dev boards can act as MCU either by using a GUI (BQstudio) or a C program. In the “Software Development Guide” document, a python script is also shown as means to communicate with BQ76942.

Can you please recommend the most feasible way to use BQ76942 in our application? We are using Raspberry pi and Atmega 2560 MCU (chip form) in other subsystems of our drones. As explained above, the main purposes of BQ76942 for us are cell monitoring and balancing, temperature monitoring and FET control using an MCU. The thing we are stuck with is the MCU part and we hope to discuss this with you.
Are there relevant libraries available for atmega chips to operate BQ769x2 and has anyone used this family of BMS with Atmel-line of MCU before?

I’ll attach an image of the prototype BMS board we designed for better illustration. Hope to hear from you soon. 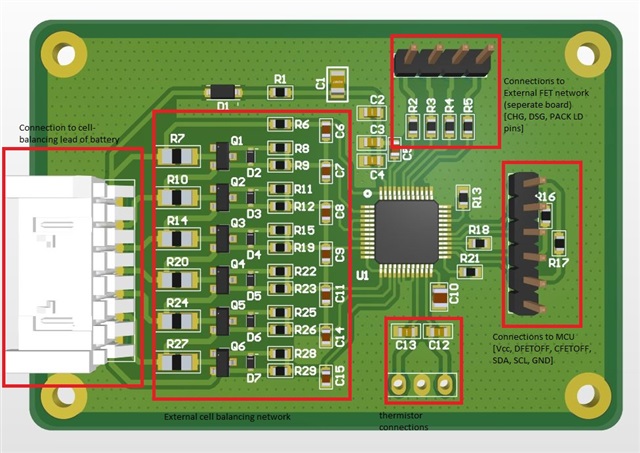 I hope you can help us with this. Thank you so much in advance.