In some TI high side switches (ex. TPS272C45), there is a unique feature called “Inrush Current Handling”. It’s an additional feature built on top of the traditional fixed current limiting. The functionality is to have a higher current limit during the initial turn on of the device, and the time for the higher current limit (tdelay) is adjustable by user. 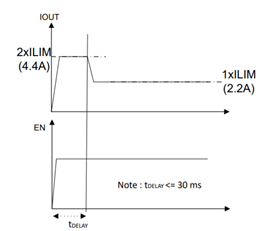 Why would we want to have higher current limit during initial charge up period? Here are two examples where this feature will become useful. First is to drive high inrush current loads like incandescent bulb loads. As the resistance of the bulb will change with temperature, in the cold weather during startup, the resistance of the bulb is very low, and it will draw a huge amount of current. However, if the current limit is too low, the bulb will take a very long time to heat up and become bright. For the bulb to be responsive and turn on fast, we would want the initial current draw to be higher. The other scenario is the capacitive load charging. As the voltage ramp up speed for the cap dv/dt is proportional to the current, the larger the current, the faster the capacitor charging. In certain application where the fast charging of the capacitive load is required, the inrush current handling feature of the high side switch will become handy.

However, if the current limit is too high, the loss of the part will become high as well, which might cause the device enters thermal shutdown. So, there is always a balance between how high the level needs to be set based on the application.