I have a TPS65917-Q1 in a design with a 3.3V input. When PWRON is initiated, the rails come up momentarily (approximately 2-4 seconds) and appear stable, but then the PMIC shuts down, except LDOVRTCOUT. I have a buck supply preceding this PMIC that is stepping 12 V from a bench supply down to 3.3 V. The bench supply is drawing approximately 96 mA when the TPS65917-Q1 is running and 2 mA when the TPS65917-Q1 shuts down. I have verified that the 3.3 V input is not dropping out at the moment or before the TPS65917-Q1 drops out, and PWRON, which is pulled up to the preceding 3.3 V supply, is remaining constant as well. Any help is appreciated. 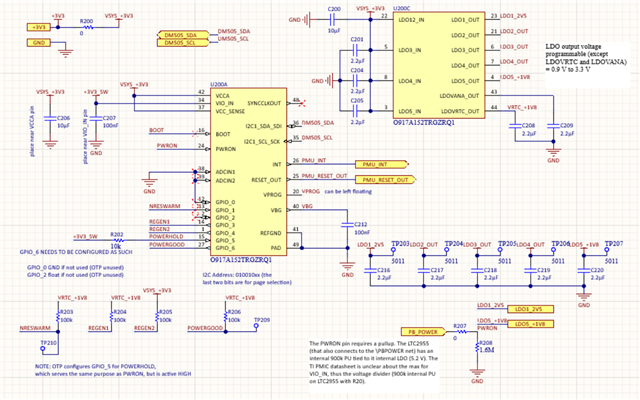